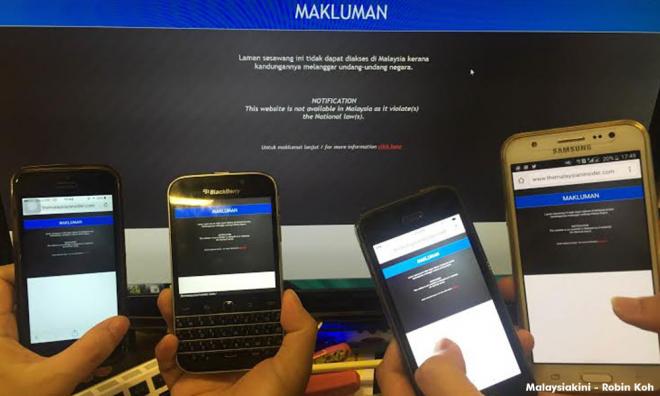 'MCMC's 'judge, jury and executioner' power must be curbed after TMI block'

There must be oversight over decisions to curb online content made by The Malaysian Communications and Multimedia Commission (MCMC), says a PKR leader.

Otherwise, the commission acts as 'judge, jury, and executioner', as in the case of yesterday’s blocking of The Malaysian Insider ( TMI ), says PKR communications director Fahmi Fadzil.

"I call upon MCMC to immediately stop from acting as 'judge, jury, and executioner' of the Internet, particularly with regards to online content accessed in Malaysia.

"Instead, checks and balances must be put in place in accordance with the principles of good governance and the rule of law.

"This can be done by amending the Communications and Multimedia Act 1998 (CMA) at the next Parliamentary session so that MCMC must acquire a court order prior to blocking public access to websites," Fahmi said in a statement.

He also recommended the creation of an oversight committee directly answerable to Parliament to monitor MCMC's activities to ensure the commission does not overstep its powers.

The government has indicated its intention to amend the CMA in Parliament’s sitting next month.

However, civil society groups have urged the Najib administration not to introduce any new policy or revise existing laws concerning the Internet until the current restrictions are overturned and inclusive consultations are held.

He said failure to do so will give the impression that the government was out to stifle press freedom.

It would be perfectly justifiable for the authority to block the access to the news portal only after it was convicted in court for wrongdoing, according to him.

“It is okay to take action against TMI if it has committed an offence. But MCMC should give a persuasive reason.

“Gerakan disagrees that (action can be) taken against a news portal so easily,” he said in a statement today.

Communications and Multimedia Minister Salleh Said Keruak today confirmed that the TMI ban was due to its article on Prime Minister Najib Abdul Razak.

MCMC's move to block access to the popular news portal has been criticised by politicians from both government and the opposition.