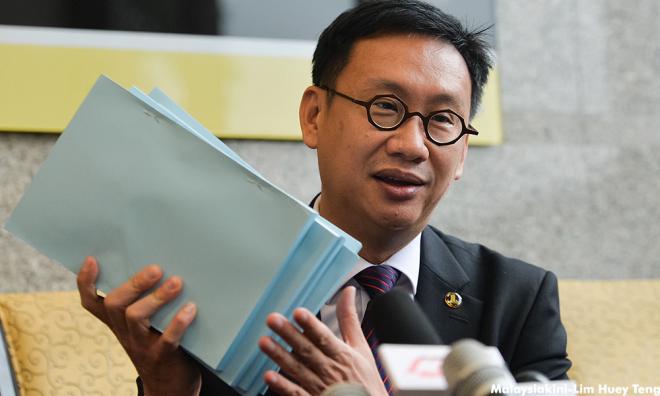 MP fumes over 'no info' on SRC's RM42m, questions if gov't lying

A PKR lawmaker has criticised the Finance Ministry for stating that state-owned SRC International had "no information" in response to questions posed on the RM42 million that reportedly went into Prime Minister Najib Abdul Razak's personal bank accounts.

Wong Chen said this was despite attorney-general Mohamed Apandi Ali having confirmed that money did flow from SRC International into Najib's personal bank accounts but cleared him on grounds that the prime minister "had no knowledge of it".

"The reply from the finance minister is shocking, to say the least, as it represents a blanket denial of the existence of the alleged transfer of RM42 million to the prime minister's personal bank accounts.

"This blanket denial is contrary to the attorney-general's official press statement on the SRC International matter where he acknowledged that the transfer existed but that the prime minister is not to be charged," said Wong Chen in a statement today.

In its reply, the Finance Ministry had said: "SRC has no information whatsoever about the issue and the matter is based on a report from a portal with unverified source of news".

"Therefore, under the Standing Order 23(1)(i), this question need not be answered as it is one regarding the accuracy (of the report) from a newspaper," it added.

Wong Chen said in light of this response despite the attorney-general's confirmation, all quarters involved in the investigation on the RM42 million should publicly clarify the matter.

"I would like to ask the attorney-general, the auditor-general, the Malaysian Anti-Corruption Commission (MACC) and Bank Negara a very simple and straightforward question.

"On the alleged SRC International matter of RM42 million being transferred to the prime minister's personal bank accounts, did it happen or not?

"If any of these four parties refutes the finance minister's blanket denial and confirm that such a transaction did happen, then it proves the prime minister has lied to Parliament," he said

Najib has repeatedly denied abusing public funds for personal gain and blamed the allegations on those conspiring to oust him from power.