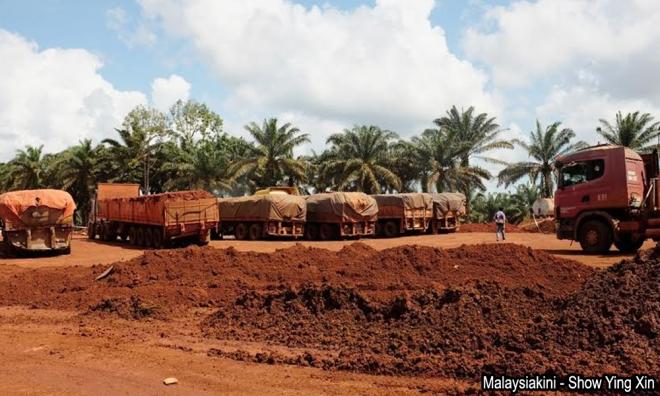 Despite the imposition of the moratorium on bauxite mining in Kuantan now entering its third month, stockpiles of the ore can still be seen at a storage area at the Kuantan Port.

However, a Bernama survey over the stockpiles at Bukit Penggorak in Kuantan, located 997 metres above sea level, found that the amount of bauxite stockpiled had decreased considerably compared to the previous month.

It is estimated that only 10 percent of the 10 million tonnes of bauxite stockpiled there is still available in the area.

After more than three hours of observation, it was also found that works to clear up and transport bauxite stockpiles into barges are being actively carried out by using lorries.

On Jan 6, the cabinet had agreed to impose a three-month moratorium on bauxite mining activities in Kuantan beginning Jan 15 that outlined measures the industry must implement during the period to stop pollution there.

The measures include the clearing of all bauxite stockpiles, setting up of an integrated storage area and implementing a bauxite waste treatment system.

Meanwhile, a source from Kuantan Port Consortium Sdn Bhd (KPC) admitted that there were still heaps of bauxite there, as the port was bound by several protocols such as the permit and transport process.

"We can only make a booking for barges, which will also take time to sail to Kuantan, after getting the permit from the authority," he said when contacted by Bernama .

However, he remained optimistic the clearing of the remaining bauxite stockpiles at the port could be done before the three-month moratorium period ended on April 15.

He said KPC hoped the government would announce the standard operating procedures (SOPs) for bauxite mining because so far, the SOPs to adddress issues such as new location for bauxite stockpiles, transport and mining methods had yet to be presented.

"KPC is only doing its job as directed, namely to clear up all existing stockpiles and clean up the port. But bauxite mining involves many parties and they should also play their role to ensure the untoward incident will not happen again.

"KPC also heard that the moratorium period can be extended if there is still no decision made. We hope this is not true because this is business. We hope the parties concerned can do something," he said.