PARLIAMENT The Attorney-General's Chambers has asked the police to complete their probe on a death in custody case, Home Minister Ahmad Zahid Hamidi said.

Zahid, who is also deputy prime minister, said the AG's Chambers has sent back the initial investigation papers the police submitted on the death of Syed Mohd Azlan Syed Mohamed Nur.

In a written parliamentary reply to Gobind Singh Deo (DAP-Puchong), Zahid also gave his assurance that the investigations would be wrapped up and re-submitted to the AG's Chambers soon.

The Enforcement Agency Integrity Commission (EAIC) in its investigations found Syed Mohd Azlan, 25, was "murdered" by police personnel, who beat him up in the police station lock-up in Sungai Rengit, Johor, on Nov 3, 2014. 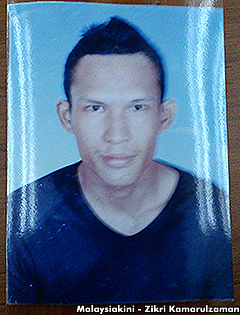 Syed Mohd Azlan ( photo ) suffered 61 injuries to his face, body and legs, some of which were consistent with "defensive wounds while protecting himself from physical attack by police personnel", the EAIC found.

The EAIC also found evidence that police personnel cleaned the scene of the beatings before the medical officers arrived to check on Syed Mohd Azlan.

The police also disposed of the rubber mat and carpet believed to have been stained with the blood of the deceased.

They also "hid away eye-witnesses" from the scene, the EAIC said.

At a press conference at the Parliament lobby later, Gobind lamented how long the investigation has taken.

'Tell us why no action has been taken'

"Perhaps the AG (Mohamed Apandi Ali) should tell us why no action has been taken this long.

"He should know justice delayed is justice denied. It’s human nature that witnesses forget when time goes by. The longer the delay, the strength of the prosecution of the case will weaken," Gobind said.

Syed Mohd Azlan, a welder, was arrested on Nov 3, 2014, after a police report was lodged on a brawl involving a firearm in September that year.

He was arrested by 13 police personnel, who ambushed the room he rented in Pengerang, Johor, the EAIC said.

He was then taken to the Sungai Rengit police station and questioned on the brawl and if he had kept firearms. No firearm was found in a police search at Syed Mohd Azlan’s family home.

He was then taken to the Kota Tinggi police district headquarters for the remand procedure but was noticeably weak and unresponsive on the way there.

Personnel escorting him then rushed him to a nearby clinic, where he was declared dead.