Dr Mahathir Mohamad and two others have filed a legal suit against Prime Minister Najib Abdul Razak for breach of fiduciary duty and misfeasance in public office.

The suit was filed in the High Court registry in Kuala Lumpur today by the the law firm of Haniff Khatri.

Najib is named as the sole defendant in the claim.

All three plaintiffs are part of the Citizens' Declaration movement to remove Najib as prime minister.

In their statement of claim, the plaintiffs said due to Najib's position as the “numero uno” of Malaysia, he controls, commands and instructs or insists omissions within the powers of each and every government machinery that includes ministries, ministers, parliamentary office (including Public Accounts Committee) and legal enforcement agencies such as the Attorney-General’s Chambers, the police, the Malaysian Anti-Corruption Commission (MACC) and the Malaysian Communications and Multimedia Commission (MCMC).

They further claimed that Najib acted in bad faith to undermine, or cause to compromise various respective institutions involved in the probe of 1MDB scandals related to the remittance of RM2.6 billion and RM42 million or any other amount into the PM's personal bank accounts.

This is to ensure that the necessary findings and investigations on the allegations against misconduct and impropriety could not be properly, transparently and independently concluded.

They claimed that 1MDB was set-up in 2009 but between 2010 and 2013, there were various reports on allegations of serious financial impropriety concerning 1MDB, and sometime between 2014 and last year, the allegations became more serious where in several newspapers including the Wall Street Journal , it was reported or alleged that 1MDB had been used to siphon funds into Najib's accounts.

The plaintiffs said the PAC looked into 1MDB and a special task force was also formed where it took the action of freezing six bank accounts on July 7, last year, and raided the 1MDB office the next day.

Muhyiddin Yassin, the then deputy prime minister, spoke at the Cheras Umno division meeting that he could no longer keep quiet and must speak the truth, they added.

Mahathir, Anina and Khairuddin further said there was an interference in the investigation process which saw the removal of Muhyiddin and Umno vice-president Shafie Apdal from Najib's cabinet for being vocal on 1MDB, and also the removal of then attorney-general, Abdul Gani Patail.

They claimed four members of the PAC were removed and two of them appointed as deputy ministers, while the police special branch director, Akhil Bulat, was replaced three weeks before his retirement.

The statement of claim also listed further interference to the ongoing investigations that saw two senior officers from the MACC transferred to the Prime Minister's Department, and a prosecuting officer from the MACC being picked up.

The Housing, Local Government and Urban Well-being Minister Abdul Rahman Dahlan was quoted as saying to the press that there was an attempt to criminalise Najib and drastic action was needed to take these people out first. 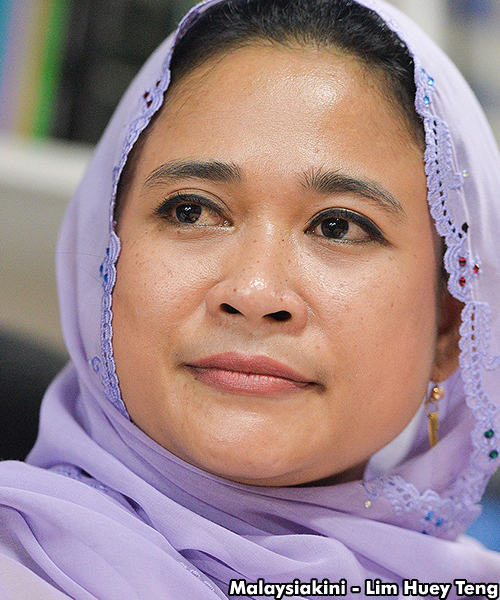 Mahathir, Khairuddin and Anina ( photo ) said categorising the funds as donations has created a lot of questions which has led to contradictory explanations on the origin and purpose of the donations.

They quoted statements by Umno cabinet ministers such as Khairy Jamaluddin, Azalina Othman Said and Nazri Abdul Aziz as examples.

All three went on to cite the action by newly appointed attorney-general Mohamed Apandi Ali to close the case against Najib after the MACC submitted its investigation papers to the AG Chambers in January.

The chronology of the facts above, they said leads to the irresistible and undeniable conclusion of the manner in which Najib has continuously interfered with the due process of the law in order to ensure that all the lawful machineries could not continue to carry out and conclude the necessary investigations pertaining to his alleged impropriety and/or misconduct.

Also cited were the actions taken against The Edge Financial Daily and news portal The Malaysian Insider as examples of Najib abusing his position.

They are seeking a court order to declare Najib as having committed the tort of misfeasance in public office and breach of fiduciary duties by using his post as prime minister, chairperson of BN and Umno president to act in bad faith, to obstruct, intercede, impede and derail investigations and inquiries related to 1MDB.

Misfeasance is a term used in tort law to describe an act that is legal but performed improperly.

The plaintiffs are also seeking a similar declaration where Najib abused his positions to take action against Anina and Khairuddin.

Furthermore, they are seeking RM2.6 billion in exemplary damages and aggravated damages of RM42 million.