Inspector-general of police Khalid Abu Bakar has been urged to resign, following a court order yesterday that he pays RM100,000 in damages to the family of slain teenager Aminulrasyid Amzah for public misfeasance.

"The IGP should do the honourable thing and resign after Aminulrasyid's verdict," Lawyers for Liberty executive director Eric Paulsen said in a statement today.

The court's finding against Khalid is "extremely troubling", he said, as it is the second time Khalid has been found liable for public misfeasance.

The other case was the custodial death of A Kugan in 2009, Paulsen said, where Khalid had made similar false or reckless remarks to the press in order to cover-up the wrongful conduct of police personnel.

In the case of Aminulrasyid, the court found Khalid liable of public misfeasance for saying in a press conference a day after Aminulrasyid was shot in a car chase with the police that they found a parang in the car and that he tried to ram into the police.

'A blatant effort at cover-up'

"The court, after weighing all the evidence, found these allegations by Khalid Abu Bakar to be unfounded and he never testified despite being called to do so.

"It is therefore clear that the information given by Khalid Abu Bakar to the press was without basis, a blatant attempt at cover-up or to justify the wrongful fatal shooting of Aminulrasyid," Paulsen added. 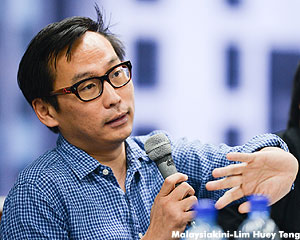 The two cases where Khalid was found to be liable for public misfeasance are extremely serious, Paulsen ( photo ) explained, as it essentially meant that the IGP had intentionally or recklessly abused his position as a public officer and caused harm against the deceased persons.

As the top police officer in the country, he said, Khalid was setting a bad example to the rest of the police force.

"Due to the double court findings of public misfeasance against Khalid Abu Bakar and the irresponsible manner in which he had carried out his duties as the top-ranking police officer, we therefore call for his immediate resignation as the inspector-general of police," Paulsen said.

He also called on the judiciary, the Attorney-General's Chambers and the police to take more seriously issues that involve state violence, and they must be particularly vigilant against abuse of police powers.

LFL also reiterated its call for the implementation of an Independent Police Complaints and Misconduct Commission (IPCMC) to function as an independent and external oversight body to investigate complaints against police personnel.

In total, the court has ordered the defendants to pay RM414,800 in damages to Aminulrasyid's family, including the RM100,000 the IGP was ordered to pay.

The civil suit was filed by the family to claim damages for Aminulrasyid's death, allegedly due to gunshot wounds to the head caused by police negligence.

In November 2013, the Court of Appeal upheld the High Court's decision to acquit and discharge Corporal Jenain Subi on a charge of causing Aminulrasyid's death when he pursued the latter in a car chase along Jalan Tarian 11/2, Section 11, Shah Alam, between 1.10am and 2am on April 26, 2010.

Besides Khalid, the other defendants named were Jenain, the Shah Alam district police chief and the Malaysian government.