According to a Singapore Straits Times report, Proton, which is the brainchild of the former prime minister, who still serves as its chairperson, is on the ropes.

Being crushed under the weight of mounting debts, poor sales and inability to pay its suppliers, the company is hoping for an urgent RM1.47 billion grant from the government to remain in operation.

However, the Straits Times report says, the feud between Mahathir and Najib is threatening this request.

Employees, the report states, who are faced with the risk of unemployment and suppliers who are not paid, are concerned about becoming scapegoats in this clash of the titans.

"They (employees) and vendors are being asked to choose between Mahathir and the (Najib) government," the daily quoted a senior Proton executive, who spoke on condition of anonymity, as saying.

The executive said while there is widespread respect for Mahathir, "there is a growing sense that he is now a liability."

Proton when contacted declined to comment on this article. 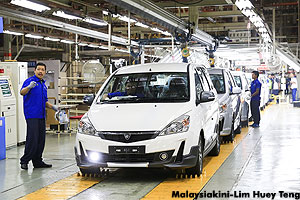 Proton has 10,000 employees, while there are some 30,000 others with regard to parts suppliers and other related services.

The cutback in production, said Straits Times , is hurting its parts suppliers, who are now being offered unsold cars as payment.

While Mahathir believes the national carmaker still has a future, industry executives and government officials, however, feel otherwise.

"Even if Proton receives a grant, it won't solve the company's troubles," a financial consultant, who has done work for Proton and the government, told the Straits Times .

Government officials, on the other hand, said the days of Putrajaya playing the role of rescuer for Proton are over.

According to the Straits Times , the only available option would be collaborating with a global carmaker.

Talks, it said, are under way between Proton and Japan's Suzuki, which is hoping to make a push into the Asean car market.