Lawyers who submitted the motion to discuss attorney-general Mohamed Apandi Ali's position for refusing to prosecute Prime Minister Najib Abdul Razak over deposits in his personal bank accounts have been summoned by police under the Sedition Act.

Francis Pereira, one of three lawyers who proposed the motion at the Malaysian Bar annual general assembly (AGM) on March 19, confirmed that he received a letter from Bukit Aman.

Pereira added that his colleague, R Shanmugam, who was another proposer of the motion, also received the letter.

"The Bukit Aman letter clearly states that it is with regard to a police report made on the motion presented at the Bar AGM.

"They said the investigation is under Section 4(1) of the Sedition Act," he told Malaysiakini when contacted. 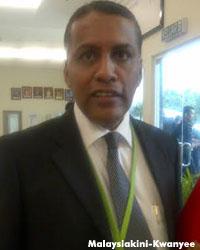 Section 4(1) concerns offences that have a seditious tendency.

Pereira ( photo ) said he and Shanmugam were summoned to give their witness statements under Section 112, but is not clear whether they would merely be facilitating investigations or may become the subject of the investigation.

He described the police investigation as "shocking" and an intrusion into the Malaysian Bar's independence.

"We are shocked and surprised that the police have taken this investigation to the lawyers.

"Clearly, this was a motion debated at out AGM, which was a closed-door meeting.

"There is no basis for opening an investigation into our motion and it is definitely an intrusion into the independence of the Bar," he said.

The motion, after being debated at the Malaysian Bar AGM, resulted in a resolution calling for Apandi's resignation.

According to the letter sighted by Malaysiakini , it was issued by Bukit Aman's Criminal Investigation Department.

Pereira and Shanmugam were told to present themselves at the Bukit Aman police headquarters at 2.30pm on Thursday.

Later today, the third proposer Charles Hector said he too finally received a similar letter requesting his presence at the same date and venue.

Hector said he was shocked by the investigation, adding that the use of the Sedition Act was also "wrong".

"The Malaysian Bar has been consistent against the Sedition Act, it is a draconian law. Even the truth is not a defence," he said.

Elaborating on the motion, Hector said there was nothing "unusual" about it as the Malaysian Bar had in the past proposed various reforms and this motion was no exception.

Hector added the three movers only proposed the motion for discussion but it was the Malaysian Bar which ultimately passed the resolution on Apandi with overwhelming majority.

"I'm wondering why the police are calling in the movers of the motion because, yes, we moved the motion, (but) it is something that can be discussed, changed and amended.

"It was voted on and the overwhelming majority passed the resolution. Targeting the movers is something very wrong," he said.

In passing the resolution, the Malaysian Bar had noted that it "continues doing all that is necessary to promote the rule of law, and a just administration of justice in Malaysia".

The full text of the resolution can be read here .