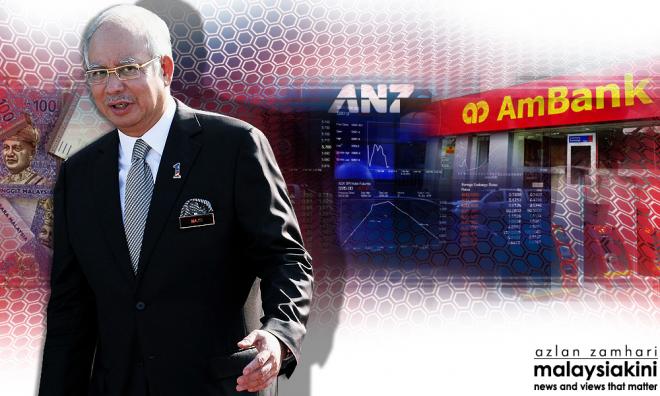 An Australian newspaper has reported that Australia's fourth largest bank, Australia and New Zealand Banking Group Limited (ANZ), may sell its stake in AmBank Holdings Berhad after the bad press from alleged billions in donation which made its way into Prime Minister Najib Abdul Razak's personal accounts at the local bank.

"ANZ is understood to have been trying to divest its stake in the scandal-plagued Malaysian bank since at least September — one month after tens of thousands of Malaysians staged street protests over the scandal," reported The Australian in the article Najib Razak scandal : ANZ 'can't act', published today.

The paper reported that the sheer volume of money pouring into Najib's accounts triggered money-laundering alerts within AmBank, which led to the bank having to pay a fine after Bank Negara found it breached anti-money laundering and counter-terrorism monetary transaction regulations linked to “politically exposed persons”.

This was in the footsteps of yesterday's expose by Australian Broadcasting Corporation 's 'Four Corners' current affairs segment which detailed the billions that allegedly flowed into Najib's AmBank accounts.

The paper further reported that ANZ had insisted it cannot act over the alleged transfer of more than US$1 billion into Najib’s personal accounts at AmBank, despite being a major shareholder of the Malaysian institution with ANZ executives working in senior management and sitting on the board.

The ANZ has been a major shareholder in Malaysia’s AmBank for almost 10 years, after buying a 24.9 per cent stake in 2006.

A partnership agreement drawn up after the acquisition and lodged with the Australian Stock Exchange (ASX) not only gives ANZ seats on AmBank’s board and empowers it to parachute its staff into key management positions, it also obliges the Malaysian institution to follow its Australian partner’s rules of probity and core policy “to the extent appropriate in Malaysia”.

It must also consult ANZ before approving any business plan, major mergers, disposals, acquisitions or changes in capital structure or direction," noted the newspaper article.

Yet the paper said that ANZ has repeatedly refused to comment if it had taken steps to deal with the suspicious matter as a major shareholder with key appointments in senior positions within AmBank.

ANZ's response as reported by The Australian , is that as minority shareholder, it is not involved nor permitted to get involved in the day-to-day operations of AmBank, adding that directors and all employees answer to AmBank shareholders and management structure, not to ANZ.

The top Australian bank however admitted that it is "very concerned by the recent issues involving AmBank" but stressed that ANZ-nominated directors and nominated employees of AmBank are subject to significant restrictions under company, banking, privacy and other laws relating to operational matters and to specific accounts.

According to The Australian report further, ANZ seem to be reducing its appointees in the bank.

It noted that ANZ’s new chief executive Shayne Elliott sat on the AmBank board until October last year, when he stepped down citing “additional workload commitments”.

While until January last year, AmBank was run by Ashok Ramamurthy, a 23-year ANZ veteran who joined AmBank as chief financial officer in 2007. He had since stepped down and returned to ANZ’s Melbourne headquarters to work on “special projects”.

The paper stated that while ANZ may appoint up to four directors to the AmBank board it currently only has only one, Suz­ette Cor, following Elliot's resignation and that of another ANZ executive Mark Whelan this month.