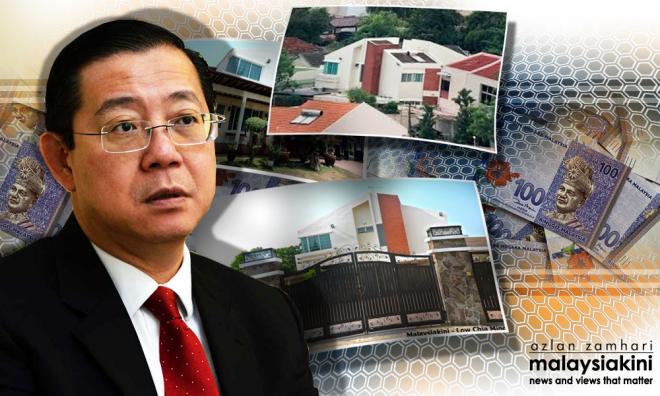 In a statement, MACC said among the individuals were Lim's wife Betty Chew Gek Cheng, his special officer Jeffrey Chew and a staff at Winbond Management and Consultant Sdn Bhd.

"All were present at the MACC office in Penang at 9.30am and they finished giving their statements about 7pm last night," MACC said.

"Lim's statement will continue to be recorded today," the anti-corruption watchdog added.

In between the questioning, the group was given a three-hour lunch break.

The previous owner of Lim's bungalow, Phang Li Koon, is the director of Windbond Management and Consultants, which allegedly had sought projects from the state government.

However, Phang in a statutory declaration declared she had no business dealings with the state government. According to her, the bungalow was sold to Lim on a "willing seller, willing buyer basis".

Umno MP Shabudin Yahya, who first raised the issue in Parliament in March, had queried whether Lim's purchase of the bungalow was linked to the sale of a state government land in Taman Manggis to KLIDC.

The duo was quizzed for 12 hours, from 9am to 9pm last night, said the MACC.

"Phang, Tong and Jeffrey's statements are recorded for the second time in investigations into this case," MACC said.

"So far, we have recorded statements from 65 individuals," the commission added.

"We have now entered the last phase of our investigations and we guarantee that the probe will be carried out in a free, transparent and professional manner," MACC stressed.