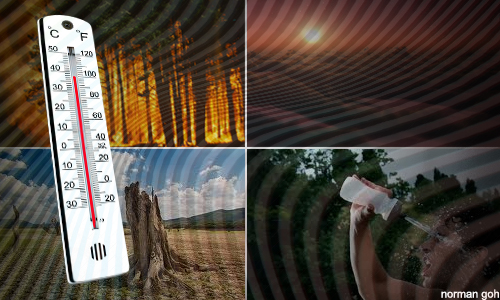 ‘2016 El Nino strongest yet but not linked to global warming’

The current El Nino phenomenon that has brought prolonged drought and sweltering heat to Malaysia is the strongest of the 20 over the last 60 years, but there is no concrete evidence to link its heat intensity to global warming, says an expert.

Climatologist and oceanographer Prof Dr Fredolin Tangang of Universiti Kebangsaan Malaysia said this year’s El Nino was even more extreme than the severe phenomena experienced in 1982/82 and 1997/98.

“There is no conclusive evidence that the occurrence of El Nino (frequency and intensity) is influenced by climate change,” said Tangang, who had served from 2008 to 2015 as vice-chairperson of the Intergovernmental Panel on Climate Change (IPCC), a United Nations agency.

The IPCC, which comprises representatives from 190 countries, produces a report every six to seven years on the trend of global climate change, its causes and impacts and how to migitate these.

Saying that the current El Nino was in its final stretch and that the condition in the Pacific Ocean was expected to return to neutral by June, Tangang stated that the IPCC, in its latest report released in 2013, did not come up with a conclusion on the inter-relation between El Nino and global warming.

He said that unlike typhoons, which the IPCC concluded would increase in intensity as global warming intensified, El Nino occurrences did not switch in frequency or intensity due to climate change.

“El Nino is a naturally occurring phenomenon, which is part of the inter-annual variability associated with oscillation of the atmosphere-ocean interaction in the Pacific Ocean that occurs in a two- to seven-year cycle.

“This system oscillates and it can be either in El Nino, La Nina or normal phases,” he said.

However, he did not discount that global warming could change the El Nino effect on the climate in a particular region.

For instance, he said, when the world continued to get warmer in future, naturally, and when an El Nino occurred, it would cause the overall temperature for the period to rise much higher than what was usually experienced.

“In my opinion, the tele-connected effect in our region could be influenced by climate change because of the changes in moisture availability and changes in regional oceans that could affect the atmosphere-ocean interaction in the region,” he said.