DAP's Abdul Aziz Isa has defended the party's firebrand speaker Hew Kuan Yau's ceramah speech, in which Hew said Aziz would "screw" Malays if he won in Batu Kitang in the May 7 Sarawak election.

Aziz said Hew, popularly known by his moniker 'Superman', was taking aim at the corrupt in his ceramah video which called on voters to support Abdul Aziz over PKR in Batu Kitang.

"What Superman said was if I'm elected in Batu Kitang, I will be the Malay representative that will screw corrupt Malays in Sarawak," Aziz told Malaysiakini when contacted. 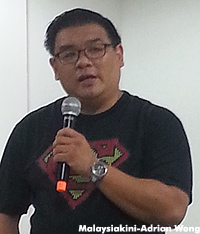 "They are trying to divert issues, such as 1MDB and GST, because we are going to face two by-elections," he said.

An excerpt of the recorded speech by Hew (photo) was publicised in blogger Raja Petra Kamaruddin's Malaysia Today website, under the title: 'Vote DAP so that we can screw the Malays'.

The speech was in Mandarin but Raja Petra's blog provided Malay subtitles.

MCA has since trained its guns on DAP over the video.

Hew later accused BN cybertroopers of mistranslating what he had said.