DAP is often accused of being driven by a Chinese chauvinist agenda, which Umno claims is aimed at undermining Malay political power.

The opposition party's leaders have repeatedly denied this while enticing more Malays to join their ranks to dispel the negative perception.

But now, DAP firebrand Hew Kuan Yau, who is known as superman among his supporters, has provided rivals with more ammunition with his controversial speech in the run up to the Sarawak state election.

An Umno division leader now accuses DAP of roping in young Malays and fielding them as election candidates with the hidden objective of furthering its race-motivated agenda.

Zeroing on Hew's speech, Bukit Bintang Umno chief Zainal Rafique claimed it is clear the objective is to demolish the political strength of the Malays.

"DAP has repeatedly claim their party is multiracial. They recruit young Malays purportedly to give the impression that DAP is not a party for a single race only...

"But when he hear Hew's speech during the campaign in Sarawak, it is clear that DAP is using the young Malays against their own race," he told Umno Online.

"The speech by Hew showcases a racist and chauvinistic ideology which DAP subscribes to from the top leadership to the grassroots level, although DAP denies this," he added.

Zainal alleged that Hew's words prove that the DAP leadership has been hoodwinking the people, claiming that it would represent all races.

"Based on my observation, it is not only a handful of Malays who were deceived by this lie, but also the Chinese and Indians who were cheated by DAP's political rhetoric which conceals their confidential agenda, which is the politics of hate," he said.

Hew's remarks also drew flak from MIC Youth, which pointed out that it was not the first time the DAP man has shot his mouth off.

"He spews racist, sexist and crude remarks and the DAP seems to be encouraging and welcoming such statements. 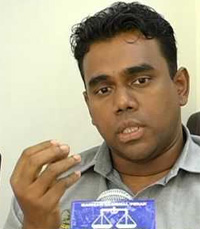 "DAP should condemn his remarks if it wants to be a political party in multi racial Malaysia. Hew constantly plays the race cards. In the run-up to the Sarawak state election, he did it again and this time, in an appalling manner," said C Sivaraajh (photo) in a media statement.

The MIC Youth leader claimed that DAP often harped on racial and religious statements, and like Zainal, accused the opposition party of possessing a forked tongue.

"They are just a multi-racial party by name but they stoke racism in most of their speeches, particularly when speaking to a Chinese crowd.

"They have failed as a multi-racial party but they have been getting away with it because of emotions," he said.

Sivaraajh urged DAP's disciplinary committee to act against Hew and sack him with immediate effect.

Yesterday, DAP veteran Lim Kit Siang chastised Hew, who was his former aide, for using crude and vulgar language, but did not regard his remarks as being racist.

He was also tightlipped on whether action would be taken against the DAP member.

Meanwhile, Hew has promised to keep his speeches clean in future, but stopped short of apologising for his remarks.

In his Mandarin-language speech, Hew urged voters to back DAP candidate for the Batu Kitang seat Abdul Aziz Isa and send him to the state assembly "to screw his own Malays, who are big politicians who are corrupt, screw pok kai (scum) Parti Bersatu Bumipuera."

"This is the most interesting scene. Those who agree, please clap," he had added.

Hew denied that he was racist, arguing that he would not have campaigned for a Malay who was contesting against Chinese candidates otherwise.

View Comments
Most Read
Most Commented
Most Recent