Department of Special Affairs (Jasa) director-general Mohd Puad Zarkashi has revealed the contents of a meeting between Umno leaders and Najib Abdul Razak shortly after the revelation that the prime minister received RM2.6 billion in his personal bank accounts.

In a dialogue with Malaysian students last night in Canberra, Australia, Puad said Umno leaders had sought a meeting with Najib as soon as the Wall Street Journal (WSJ) broke the news about the deposits.

He did not specify the date of the meeting, but indicated that it happened on the night after the WSJ broke the story on July 3 last year.

In the meeting, Puad said Najib admitted to receiving the money and claimed he had discussed the matter with then Bank Negara governor Zeti Akhtar Aziz and even received the central bank's approval to bring in the money.

"When we arrived at his home, we asked Najib if he indeed received RM2.6 billion, he said correct. He didn't deny it and he said he had Bank Negara documents of the approval to transfer the money into his personal bank accounts.

"The only problem, he said, was that perhaps an officer from Bank Negara or AmBank had leaked the matter to Sarawak Report and it was then passed to the Wall Street Journal. 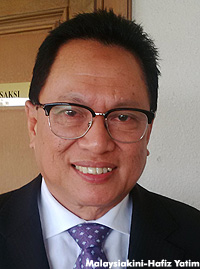 "Depositing into his personal account in the country would require Bank Negara's approval and he had discussed it with the Bank Negara governor, documents had to be filled," Puad (photo) told students at the dialogue organised by Australia Umno Club, held at the Australian National University's Warrumbul Unilodge.

He said Najib had also insisted to Umno leaders in the meeting that the massive deposits was not for himself.

"He said if the money was for his personal use, it would be better for him to keep them in his overseas personal bank account," added Puad.

To combat the Islamic State

Puad said Najib in the meeting had told them that the money was from the Saudi King (Raja Saudi).

"We already knew that night. It was a contribution from the Saudi King and it was not deposited into (Umno's) official account as the purpose was to combat the Islamic State, and secondly, to help in other places such as in Palestine and others.

"That was what we were told. That is why we remained silent," he said.

Puad told the students that the notion that the government was not consistent in explaining the RM2.6 billion saga was merely an issue of perception.

"Actually, Najib's answers had been consistent. He is also not in the wrong in terms of the political donation.

"There is no law on political donation in the country," he said.

Puad added that the government also knew where other parties were getting their funding.

The dialogue was part of Jasa's tour of Australia, dubbed "Veracity Tour", to explain current issues in Malaysia.

View Comments
Most Read
Most Commented
Most Recent