Is Hadi's bill about hudud punishments?

"I would like to clarify that the amendment (bill) is not hudud law, it is just to enhance the punishment from six times (of the rotan) to a few times, depending on the offences," he said.

He also said, "It also involves the syariah courts and only involves Muslims. It has nothing to do with non-Muslims."

Najib could be right about the second point as this bill now seems to be governing offences involving only Muslims.

But is this not about hudud?

No hudud law, only hudud punishments and offences

There is no such thing as hudud law. Hudud refers to punishments and offences.

Take the Kelantan Syariah Criminal Code II (1993) 2015 for example. It metes out three types of punishments:

iii. Ta'zir (discretionary) - residual punishment in the forms of imprisonment and diyat (blood money) for hudud and qisas offences when the hudud or qisas punishments cannot be meted out because of evidence or circumstantial reasons.

The first lies in the ninth schedule of the federal constitution, which places criminal justice in the federal list and syariah court as item 1 in the state list.

In Item 1, the power of the syariah court includes "creation and punishment of offences by persons professing the religion of Islam against the precepts of that religion, except in regards to matters included in the federal list".

The second lies in the Syariah Court (Criminal Jurisdiction) Act 1965 (Act 355). Section 2 of the Act imposes the so-called 3-5-6 limit on punishments meted out by syariah courts: imprisonment up to three years, fine up to RM 5,000 and whipping up to six lashes.

Hadi tabled a similar Private Member's Bill last June. Both his bills last year and this year wish to remove the 3-5-6 cap. But Hadi's bill this year is less ambitious. 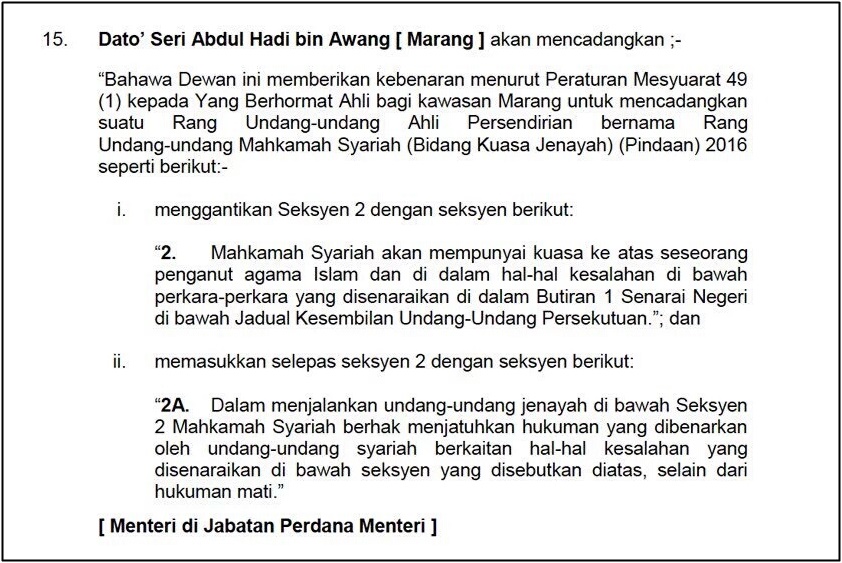 First of all, "death penalty" is kept out of syariah court's reach. This immediately takes out stoning for adultery by married offenders.

Secondly, while both bills make reference to tem 1 in state list of the ninth schedule, reference – presumably "except in regards to matters included in the federal list" – is used to exclude offences already covered by the federal law. That excludes the hudud offences of theft and robbery – which imposes amputation – and also interestingly sodomy, which is outlawed as unnatural sex under the Penal Code.

Last year, such exclusion was not heard off. Even doctors supportive of hudud punishments offered to perform amputation.

Caution however must be taken when one looks into the description (huraian) of the bill.

If the description (which might have been copied from the 2015 bill) reveals the real intention of the bill drafter, then Hadi actually hopes to change the constitutional provision that confines syariah offences to the violations of "precepts of religion" (perintah agama) by a normal bill.

However, the Najib-Hadi pact seems to pursue a gradualist approach in expanding syariah rule.

Not only the most controversial hudud punishments of amputation and stoning are taken out, the non-Muslims are also now excluded by excluding offences of theft, robbery, homicide and bodily injuries, where non-Muslims might be victims or witnesses to crimes committed by Muslims.

This makes Najib-Hadi's agenda of syariah expansion look more reasonable and acceptable amongst the Muslims.

Some but not all hudud punishments enabled

What are the outcomes if Hadi's bill is retabled and passed in the next parliamentary session?

Based on the restrictive interpretation, three hudud offences in the Kelantan's code - theft, robbery, sodomy - and all qisas offences – homicide and causing bodily injuries – are excluded because they are already covered by the Penal Code.

Four offences – adultery (zina), false accusation of adultery (qasaf), intoxication (syurb) and heresy (irtidad dan riddah) – will be enabled but one more hudud punishment – stoning for married offenders – is excluded because it means to cause death.

This means that five more hudud punishments under the Kelantan Syariah Criminal Code II (1993) 2015 [KSCC II] would be enabled:

i. for adultery by unmarried offenders, whipping of 100 lashes

ii. for false accusation of adultery, whipping of 80 lashes

iii. for intoxication, whipping of 40-80 lashes

iv. for heresy, forfeiture of property

v. for heresy, imprisonment for an unspecified period in the hope of the offender's repentance (the constitutionality of last two may be contested (see table below) 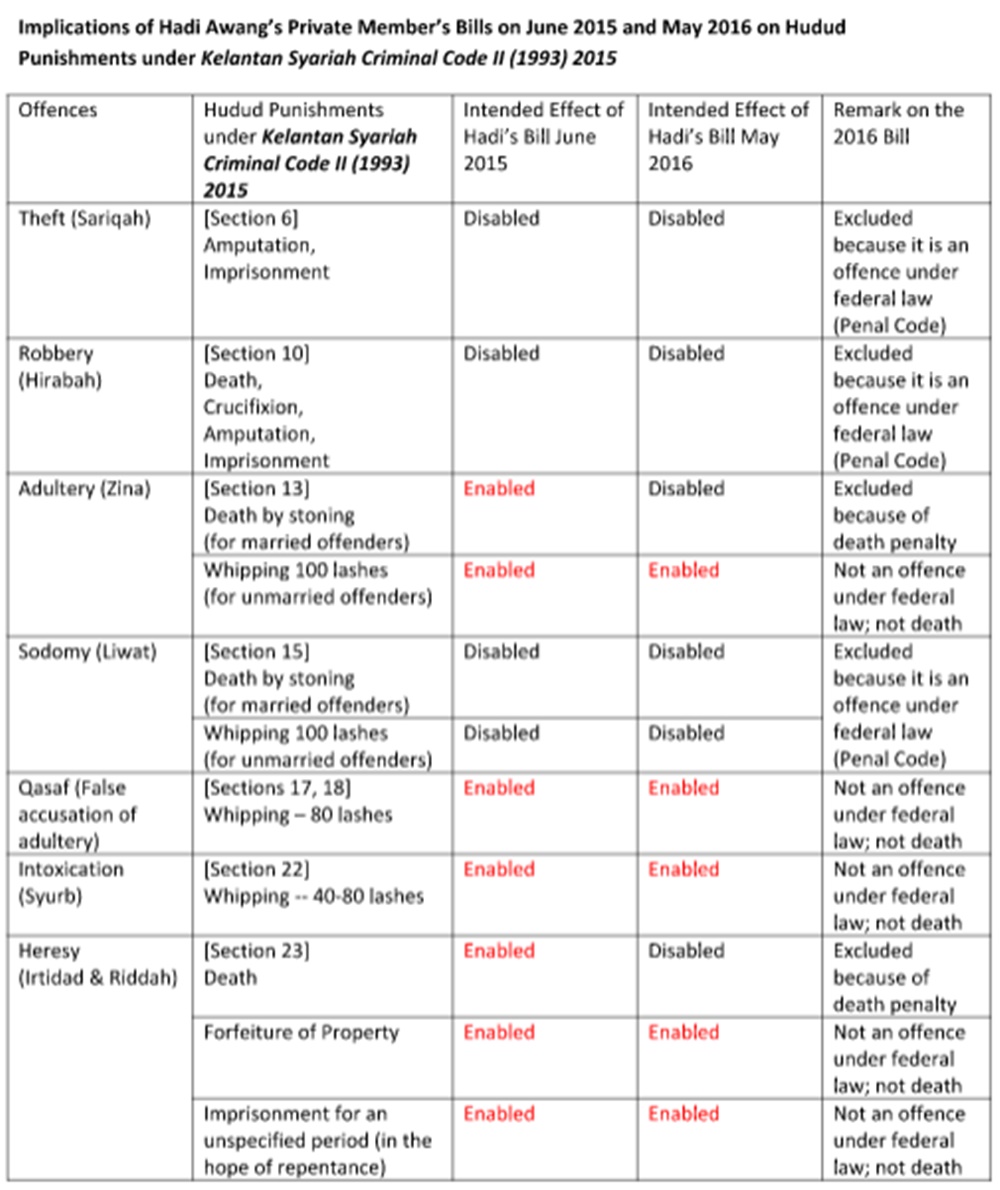 Hadi's bill is therefore about some hudud punishments – whipping is clearly one – albeit not all. Najib lies. Will his BN allies buy his lie as explanation?

If Hadi's bill is passed, it will affect not only Kelantan and Terengganu, which have in place virtually suspended syariah law that provides hudud punishments.

Other states may follow suit. Remember that proposals to expand syariah rule were made by Umno lawmakers in Selangor and Johor?

Also, the punishments may also be expanded.

The passing of Hadi's bill - if it happens in October - it concerns more than the Kelantan's code. It is a question of floodgates.

Just last December, two university students in Aceh were whipped in the public for "close proximity" (khalwat). The girl collapsed and was rushed to hospital after receiving five lashes.

Malaysians need open and respectful dialogues and debates on whether we want to see such scenes - for example 80 lashes for drinking, 100 lashes for adultery - in Kelantan and beyond. We need to hear each other out.

In these dialogues and debates, we must remember that Malaysia was founded in 1963 and her foundations are the Malaysia Agreement and the Inter-Governmental Committee (IGC) Report, which make her a secular federation.

Abim: Discuss Hudud Bill in depth with all, including non-Muslims