MP SPEAKS More than half of public universities in Malaysia have extreme disparities in favour of women, according to a new report by the Penang Institute. The gender disparities are measured according to the Gender Parity Index (GPI), which is calculated by dividing the total number of women over the number of men, and rounding up to two decimals.

For example, an institution with GPI score of 2.0 means that there are twice the number of women compared with men in that institution.

A comparison between the top ranked university in Malaysia, the Universiti Malaya (UM), with other premier universities in developed nations reveals that the gender gap against men in UM is higher compared with its foreign counterparts.

The National University of Singapore, which shares a common history with UM, has nearly equal numbers of male and female undergraduates. Other flagship universities such as Yale, Oxford,  and Monash (Clayton campus in Melbourne, Australia) also had smaller gender disparities compared to UM.

According to Unesco, a GPI measurement of 0.97-1.03 indicates that gender parity has been
achieved. A score of less than 0.8 or greater than 1.25 indicates that an entity is ‘far from the goal’ of gender parity. Using the Unesco definition, UM would be in a situation of extreme gender disparity given its GPI score.

What is of concern is that the GPI score in the IPTAs has increased over the past few years, indicating that the gender disparity is increasing. The average GPI among all public universities in 2013 was  1.71, which represented an increase from the year 2009, in which the GPI was 1.66.

At the same time, our study also reports that women also outnumber men in seven of the eight major fields of study in Malaysia. Data from the ministry of higher education finds that the gender disparity between men and women is greatest in the fields of education (2.37), as well as health and welfare (2.51).

Women also outnumbered men in the field of science, mathematics and computers (1.69), subjects which are often believed to be male-dominated in countries overseas.

Malaysian girls better in all subjects

The field of study in which men still outnumber women is engineering, manufacturing and construction. However, women in Malaysia have far greater representation in this field, compared with many developed nations.

Of the engineering undergraduates in Malaysia, 45 percent are female, as compared with 17 percent in the US. 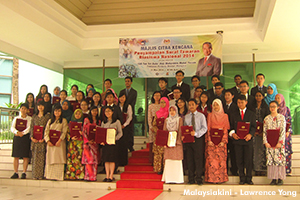 While Malaysia can be proud of the rapid rate at which the gender disparity between men and women entering university has been closed, the presence of a reverse gender gap in our public universities raises other concerns, such as the career trajectory of the ‘missing’ boys and the potential negative impacts on crime and other social indicators.

The reasons for the this significant and growing gender disparity in the IPTAs are still not well understood in the Malaysian context. One reason could be the academic achievement gap between boys and girls begins from a young age.

One Unicef report on the region found that Malaysian girls outperformed boys in all key subjects such as English, Mathematics, Science and Bahasa Malaysia.

The achievement gap begins in lower secondary school and widens as children grow older. In the 2012 Programme for International Student Assessment (PISA), Malaysia was one of five, out of 65 countries tested, in which boys were outperformed by girls in mathematics.

Malaysian girls also did better in science and reading. As a result, girls drop out of secondary school at a lower rate than their male counterparts. This gap between female and male education enrolment rates increases from the secondary to the tertiary level.

Further research needs to be done to evaluate if this significant female-male enrolment disparity in the public universities translates into significant differences in socio-economic indicators in the country.

In addition, careful attention needs to be paid to see if the recent emphasis on technical and vocational education and training (TVET) is sufficient to narrow the gender disparity in post-secondary education.

Finally, just because female enrolment in IPTAs have far surpassed male enrolment does not mean that gender discrimination against females has disappeared. Malaysia is far from the top ranks of indexes which measure gender equality.

For example, Malaysia ranks 111 out of 145 in the World Economic Forum’s Global Gender Gap Index.

On the UNDP’s Gender Inequality Index (GII), Malaysia does somewhat better coming in at 62 out of 188 countries.

Just because more females are in public universities compared with males also does not mean that the wage gap between females and males has been abolished.

ONG KIAN MING is the DAP Member of Parliament for Serdang.

[A working paper and presentation slides on this topic will be made available on the Penang Institute website - www.penanginstitute.org – soon. For any questions on this report, please email Jonathan Yong at [email protected]]