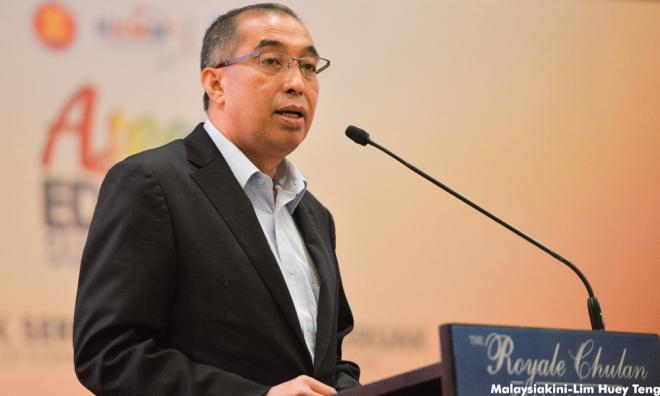 “Mahathir said Prime Minister Najib Razak has stolen at least RM42 billion and maybe even as much as RM50 billion of 1MDB’s money.

“I challenge Mahathir to repeat this allegation during his campaign in Sungai Besar and Kuala Kangsar, since he has never withdrawn that allegation or apologised for making the allegation,” Salleh writes in his blog.

He teased Mahathir as "the de facto Opposition Leader", who is trying to avoid talking about the 1.2 million Citizens’ Declaration signatures due to the allegation of fraudulent signatures, which the police are now investigating.

Selleh said it looks like Mahathir has only one option left, which is to "recycle" last year’s allegation regarding 1MDB even though “the attorney-general, the parliamentary public accounts committee and The Wall Street Journal have all confirmed there is no evidence of misappropriation or wrongdoing in 1MDB”.

The communications and multimedia minister also taunts Parti Amanah Negara over PAS president Abdul Hadi Awang’s motion on his Hudud Bill, saying Amanah is trapped in a dilemma and hence will avoid talking about the issue during the campaign.

“Amanah cannot afford to declare that it oppose the syariah amendment and neither can it declare support.

“So Amanah is terkepit (caught) in a situation that does not allow it any leeway,” he writes.

Salleh said Amanah needs the Chinese votes, plus it hopes to take some of the Malay votes.

“Amanah also threatened to sue anyone who alleges that it opposes the syariah amendment.”

Over the weekend, Amanah strategy director  DrDzulkefly Ahmad preempted by-election attacks over the issue, saying the party preferred to focus on the higher ideals of Islam rather than on the purely punitive.

“While recognising the appropriate roles of 'punishment and prohibition' in Islam, Amanah is very wary and opposed to the over-emphasis of such an orientation of presenting Islam... on a rigid 'do's and don'ts' and finally becoming 'Talibanic' in 'coercion and policing'.

“PAS is at liberty to don any clothing from Arabic jubah and turbans to Malay songket and tanjak and brandish the longest keris. We could only wish them well,” he said.