Langkawi MP Nawawi Ahmad has come under fire for stating that his salary is not paid by the people but is from the government.

He said public funds did not belong to the people, courting ire from social media users.

"Once money has passed on to another quarter, it is no longer our money.

"if the government's money is really the people's money, let us attack all government departments to take back our money," he said in a Facebook comment. 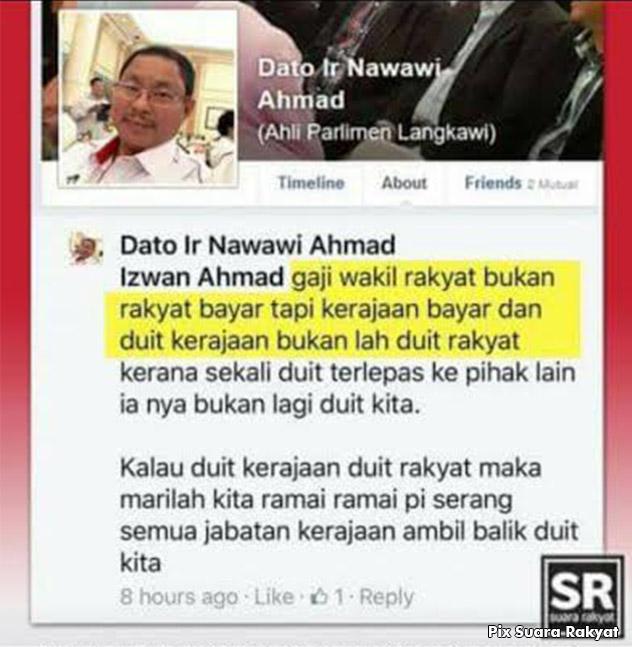 Nawawi made the comment in a debate about taxes where a netizen criticised him and reminded that his salary is paid for by the people.

This was after he made a post highlighting that Denmark's free education and healthcare, something advocated by Malaysia's opposition, came at the expense of a minimum of 40 percent income tax and 25 percent sales tax.

Since then, a screenshot of Nawawi's controversial comment was widely circulated on social media.

Amused internet users then reproduced the screenshot on Nawawi's Facebook page, to which the Langkawi MP adamantly defended the comment.

He refuted Facebook user Imran Omar who posted the image to his page and called Nawawi stupid. 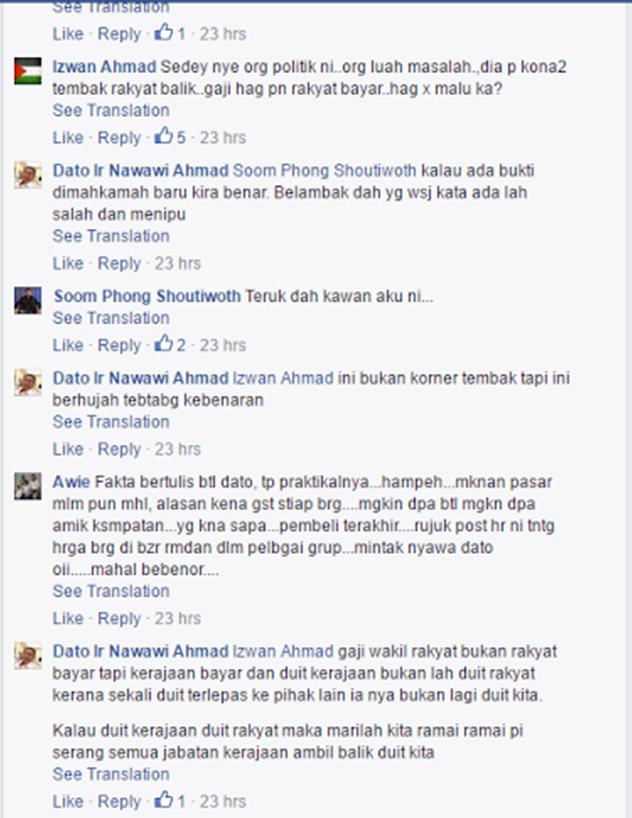 "This is the reality, not stupidity. How can the govenment's money be our money? Nonsense," said Nawawi.

Another Facebook user Zaki Rosli also reproduced the comment on Nawawi's Facebook page, stating: "What is this, your position is already called Wakil Rakyat (people's representative), the government is also formed through Wakil Rakyat, what damn statement is this?"

However, Nawawi continued to face a barrage of screenshots of his comment.

He eventually sought to brush it off, stating: "Haha, just to let it get a bit heated during this lethargic fasting month.”

Nawawi also came under fire from former New Straits Times group editor Mustapha Kamil, who recently signed from his position in protest of a media blackout on the 1MDB scandal.

"Another simpleton's logic in a nation dreaming of becoming a developed country in four years time," he said on Facebook.

This is not the first time Nawawi had been embroiled in controversy over his comments made on Facebook.

Hours after then DAP chairperson Karpal Singh was killed in a car accident in April 2014, Nawawi posted a picture of Karpal's corpse and asked who wants to challenge the then Bukit Gelugor MP.

This was in reference to Karpal's remarks that hudud in the country will only be implemented "over his dead body".