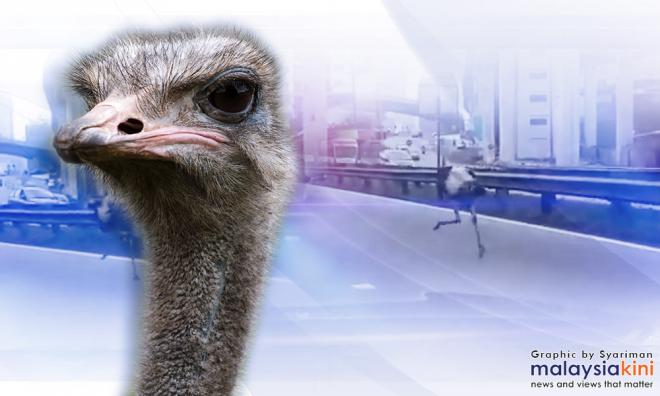 Chickaboo, the ostrich which caused a stir when it sprinted along the Federal Highway in Kuala Lumpur today, was caught unharmed and brought back to a farm in Semenyih.

According to eyewitness Dr Rathimalar, the ostrich initially jumped out of a truck which was transporting it as it passed in front of Universiti Malaya.

The ostrich then made a dash towards the highway at about 3pm today.

"We tried to block it with our car because we didn't want it to get hit and the owner made a couple of rounds to look for it," she told Malaysiakini.

"We called the Civil Defence Department but they did not manage to come in time," she said.

Rathimalar said the ostrich was finally cornered and pinned down at around 4.15pm by two rescuers, Agus and Shunmugavael.

The bird was then retrieved by the owner, who did not identify himself.

When contacted, the Ostrich Wonderland and Showfarm in Semenyih confirmed the ostrich is safe.

However, the representative clarified the ostrich does not belong to Ostrich Wonderland and Showfarm but to a nearby farm.

He also assured that Chickaboo will not be anyone's dinner anytime soon, as the farm does not breed the birds for meat.