Two scientific journals have retracted papers written by a group of Universiti Malaya (UM) researchers together with several others, while a third journal is in the process of doing so.

This came after an investigation by the university has found that the group had falsified and/or manipulated data that was subsequently published in four peer-reviewed journals.

The journals that have retracted the papers are Scientific Reports and Frontiers in Pharmacology, while PeerJ said a retraction is in progress. 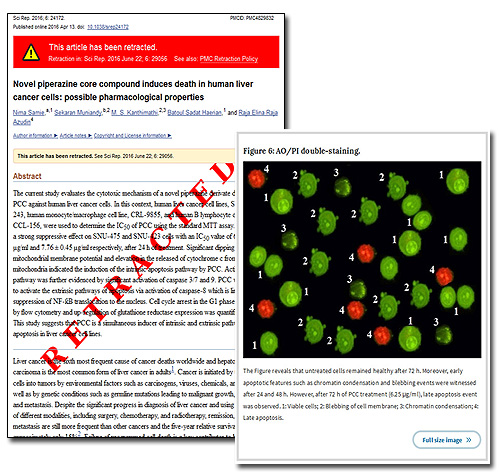 In a retraction notice published by Scientific Reports today, the journal said its own investigations have confirmed the allegations.

“Following online criticisms of the published paper, an investigation at the journal has confirmed the manipulation and duplication of data and a level of image processing that is not compliant with the journal’s policies on image data integrity [...]

“All authors acknowledge these issues and agree to the retraction of the article,” it said of the paper that was originally published on April 13.

Separately today, the journal Frontiers in Pharmacology said it too has confirmed the allegations in the group’s paper that was published in the journal on Jan 28.

Therefore, the journal and the paper’s authors have jointly retracted it.

Another journal, PeerJ, said on Thursday last week that it is in the process of doing the same, after it and university authorities had conducted an investigation on the paper that was published in the journal on March 17.

“An investigation conducted internally by PeerJ as well as a ‘Preliminary Report on the Investigation of Allegations of Scientific Misconduct at the Faculty of Medicine, Universiti Malaya’ has concluded that this article should be retracted.

“PeerJ is in contact with the authors, and this article will be retracted soon,” it said.

The title on contents of the fourth allegedly fraudulent article is not publically known, but it is reportedly published in the journal Recent Patents on Anticancer Drug Discovery. The current status of this paper is also unknown.

Two of the papers describe the petri dish testing of a chemical compound on human liver cancer cells, while a third paper describes a different chemical and its effects on human colon cancer cells.

The studies were funded with grants from the Higher Education Ministry and the Postgraduate Research Fund.

One of the papers also involved a researcher from Kuala Lumpur Hospital’s (HKL) Department of Pathology, while another paper involved the HKL researcher together with two researchers from UM’s Faculty of Science, and one researcher from the National Institute of Genetic Engineering and Biotechnology in Teheran, Iran.

Early this month however, allegations emerged on social media that some of the images featured in the papers appear to have been manipulated, which resulted in duplicates of identical-looking cells.

This caused an uproar amongst other scientists, which was subsequently reported in the mainstream scientific press.

Following an investigation, a committee set up the university has confirmed the alleged fraud, according to a report by The Star on Friday last week.

“As UM adheres to a strict policy of integrity and ethical practices in research, the authors have been asked to retract all published articles in Scientific Reports, PeerJ and Recent Patents on Anti-Cancer Drug Discovery immediately,” UM vice-chancellor Mohd Amin Jalaludin was quoted as saying.

He added a report has been submitted to the university’s Research Integrity and Ethics Committee for further deliberation, including possible disciplinary action for the paper’s authors.

The papers’ lead author Nima had previously denied allegations of fraud, and reportedly told the science blog Retraction Watch that the cells looked the same because they were in the same stages of development.

Following the revelations, the Malaysian Social Science Association (MSSA) had urged universities to reconsider the ‘unrealistic’ KPIs imposed on universities that are meant to help boost their rankings.

“With universities putting a high priority on ISI-indexed publications in order to boost their rankings, KPIs on research and publication have sometimes been set at unrealistic levels, thus putting pressure on academic staff and researchers.

“While this does not justify or mitigate the seriousness of such offences, it should serve as a reminder to our universities that setting unrealistic targets will draw desperate responses,” it said yesterday.