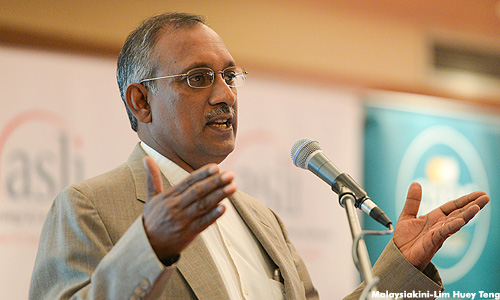 The Council of Churches of Malaysia (CCM) said it was greatly alarmed by Pahang mufti Abdul Rahman Osman's labelling of those who opposed hudud as kafir harbi.

"It is to date, one of the most divisive and provocative statements made by a state official, which creates suspicion and disunity in a multiracial society.

"In a country which seeks to uphold the rule of law and declares that all Malaysian citizens are equal before the law, this statement is wholly inconsistent with that objective," said CCM general-secretary Hermen Shastri in a statement today.

Hermen added that Abdul Rahman, like any other citizen, should be subjected to the law.

"The statement is seditious in nature and no one should be above the law," he said.

He also urged government leaders to speak up against this.

"The time has come for ministers in government, menteri besar and chief ministers to stand up and declare their distaste for such statements from paid officials of the state," he said.

Kafir harbi refers to infidels who are permitted to be slain for waging war against Islam.

He was commenting on DAP's objection to hudud in the country.

Abdul Rahman later clarified that he was not only referring to DAP, but all non-Muslims in general, who opposed Islam.