The first charge is on abusing his power to benefit himself and wife by approving the re-zoning of a plot of land to Magnificient Emblem Sdn Bhd, and the second charge is related to him obtaining a property on 25, Jalan Pinhorn, from Phang Li Khoon at below market value.

The first charge, under Section 23 of the MACC Act is punishable with imprisonment of up to 20 years and a fine of five times the value of the gratification.

The value of the property was then RM4.27 million. Guan Eng is accused of committing the offence on July 28, 2015.

The second charge, under Section 165 of the Penal Code, carries the maximum penalty of not more than two years in jail, or a fine, or both.

Lim was released on bail of RM1 million. He need not surrender his passport, but has to inform the court before travelling overseas.

Businesswoman Phang Li Koon, who sold the bungalow to Lim, was charged with abetment.

She claimed trial to the charge under Section 109 of the Penal Code, read together with Section 165.

The prosecution team is led by attorney-general Mohamed Apandi Ali while Lim is represented by a team of lawyers led by DAP's Puchong MP Gobind Singh Deo.

Phang is represented by counsel K Kumaraendran and Devkumar Kumarendran.

The case is set for mention on Sept 22.

Malaysiakini is covering the event LIVE.

12.15pm: Justice Azmi fixes Sept 22 for case management, when the court will consider whether to go for a joint trial after perusing all the documents.

Court adjourns and Guan Eng is expected to hold a press conference at the Town Hall, which is situated about 500 metres from court house. 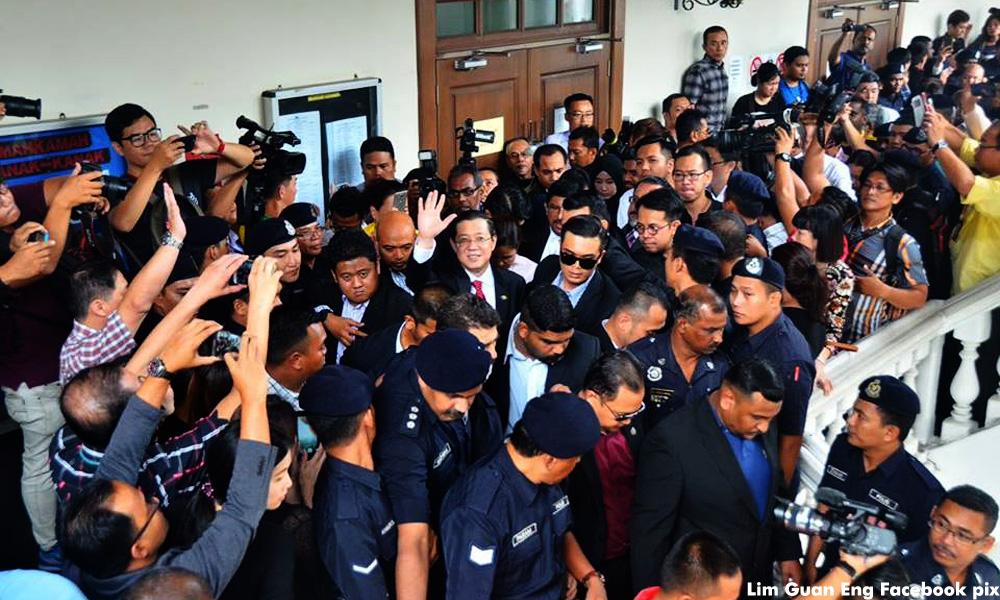 11.50am: In the High Court, Guan Eng pleads not guilty and claims trial when the two charges were read before Judicial Commissioner Azmi Ariffin.

Justice Azmi then set bail at RM1 million with one surety.

The court did not order for Guan Eng to surrender his passport but he needs to notify the court and AG's Chambers two days before he travels abroad.

Gobind did not object to the bail conditions imposed on Guan Eng.

In the same court, Phang also pleads not guilty to a charge of abetting Guan Eng in committing the offence at the same place and time.

Justice Azmi sets bail at RM200,000 with one surety and no other conditions imposed.

11.15am: Guan Eng and Phang are led out of the Sessions Court to the High Court, which is situated in another block.

State exco Phee Boon Poh expresses his dissatisfaction, questioning why Phang, who is his kin, was handheld by police officers as she leaves the courtroom.

"It is not like she is going to run away," he fumes.

Phang's female relative, an elderly woman, also complains as she is not allowed to follow Phang as she leaves.

Outside, the crowd has grown to 1,000. Some at the court compound start shouting "Lim Guan Eng! Lim Guan Eng!" as the CM is escorted to the High Court.

Some supporters are peeved that they are not allowed to go to the High Court by plainclothes police officers.

A petite woman in baju kurung and tudung is seen scolding the police as she leaves, saying "We are being maligned, go ahead... hold on tightly to the iron gates".

10.40am: The charge against Phang is read out by a court official. Apandi tells the court that he and his team will be prosecuting Phang's case.

She is accused of committing an offence on July 28, 2015 where she abetted Guan Eng to obtain a "valuable property" for RM2.8 million which he knows to be below market value as the value of the property then was RM4.27 million.

"He obtained the property knowing that you have business dealings with the state government," reads the charge. 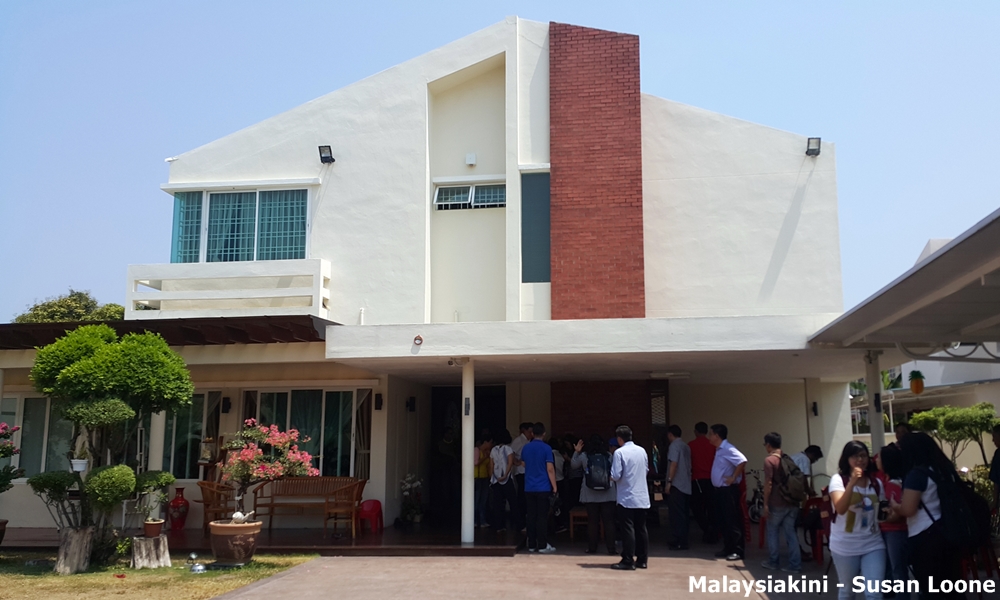 Phang is charged with committing the offence punishable under Section 109 of the Penal Code, which is read together with Section 165.

Apandi applies for the case to be transferred to the Penang High Court.

Judge Roslan agrees to Apandi's request saying: "The case will be transferred to the Penang High Court for mention today".

"There are six (counsels) in the prosecution team," he says.

Guan Eng is spotting his favourite red tie while Phang is in white and black dress. She looks pale.

The two charges against Guan Eng are then read out.

The first for abusing his power to benefit himself and wife by approving the rezoning of a plot of land to Magnificient Emblem Sdn Bhd, and the second charge is related to him obtaining a property below market value on 25, Jalan Pinhorn from Phang Li Khoon.

The first charge under the MACC Act is punishable with up to 20 years imprisonment.

The value of the property was then RM4.27 million. Guan Eng is accused of committing the offence on Jul 28, 2015.

Apandi tells the court that there is a list of witnesses which will be revealed later.

He then requests for case to be transferred to High Court under Section 60 of the Criminal Procedure Code.

Roslan agrees to transfer the case to High Court for mention today. 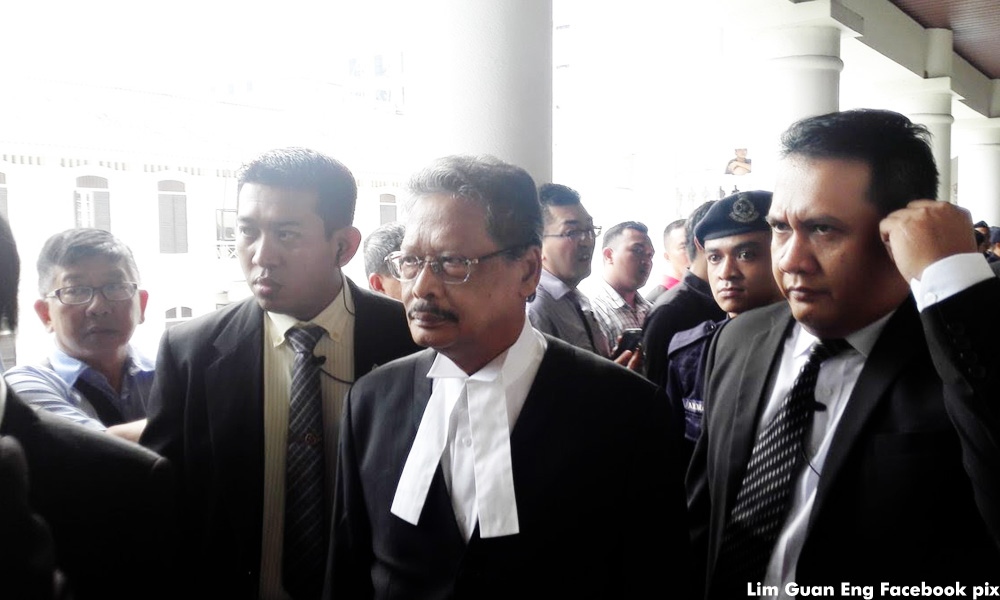 There are about 100 people in the courtroom, while 300 outside the court.

Apandi takes his place with the prosecution team and is seen having a chat with Guan Eng’s lawyer Gobind Singh.

10.04am: Guan Eng hugs his mother and assures her that he is alright. He then hugs his sister Hui Ying, and wife, Betty, who looks rather distraught. He shakes hands with Kit Siang.

Guan Eng smiles and tells reporters, "I am alright", and is seen discussing with lawyer and DAP colleague Gobind Singh.

10am: Sirens and chanting are heard outside the building. Guan Eng brought into courtroom by police and MACC officers.

Phang is represented by counsel K Kumaraendran and Devkumar Kumarendran.

Sessions Court judge Roslan Hamid is presiding over the case.

9am: The courtroom is full. Seats are fully occupied by media personnel and a number of Special Branch officers. 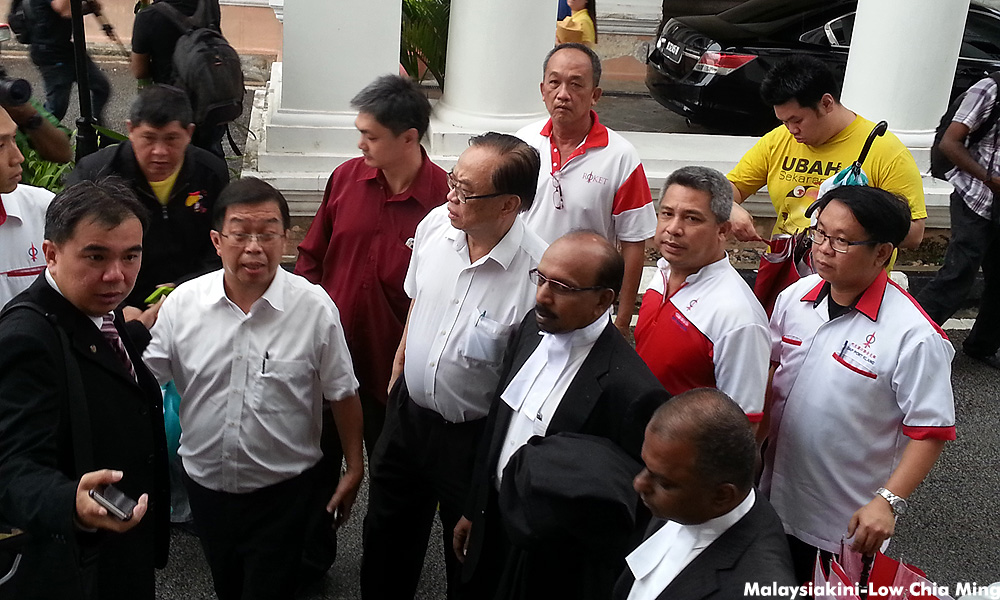 Guan Eng and Phang Li Khoon are expected to be produced in court at 10am.

Attorney-General Mohamed Apandi Ali, who has vowed to personally prosecute the case has yet to appear in court.

8.15am: Supporters of Chief Minister Lim Guan Eng have gathered at the Penang Court along Light Street as early as 8am today, with some alleging that the police blocked them from entering the courtroom.

Seberang Perai municipal councillor Satees Muniandy was seen arguing with a police officer outside the building.

"Tell us under which law you are preventing us from entering the court house," he thundered.

The police officer replied, “We can stop anyone from entering any building.”

Satees again demanded to know which law was used to stop him from witnessing Lim being charged in court.

"I will find out which law and let you know," said the officer, who is only known as chief inspector Kannan.

"Until then, don't stop anyone from going in," retorted Satees, who is DAP Batu Kawan secretary.

It is learnt that some DAP members spent the night outside the state Malaysian Anti-Corruption Commission (MACC) headquarters in Jalan Sultan Ahmad Shah where Lim is held.