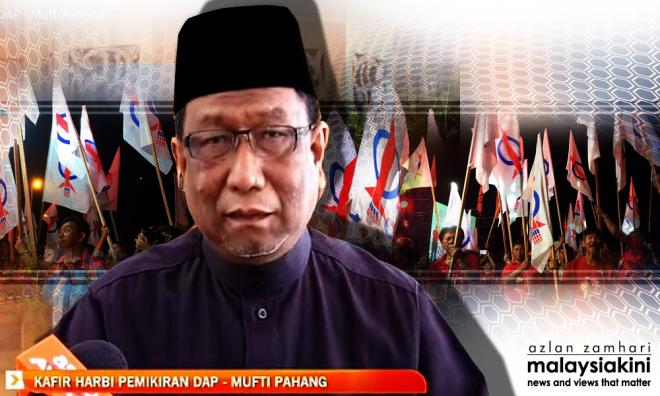 Beyond the 'kafir harbi vs 'kafir dhimmi' debate

COMMENT Much as it has gained national attention, l am not about to paraphrase the many writings on the infamous statement of the Pahang mufti Abdul Rahman Osman.

In brief, the categories (and lexicology) of kafir harbi and kafir dhimmi are neither relevant nor applicable within the socio-political structure of modern nation-states.

Abdul Rahman's refusal to retract his position has been extremely deplorable. Given the current backdrop of deepening racial and religious antagonism, this surely does not bode well for a nation seeking urgent and critical nation rebuilding.

But perhaps it is pertinent to understand why has the mufti taken the liberty to express such an opinion. Is he alone or in fact the spokesperson of many?

This brings us to the most fundamental subject of 'managing legitimate dissent and differences' within the construct of a polity, namely the Malaysian political context and construct, especially in light of a legislative process.

Islam not only recognises but as well celebrates and arranges for such positive outcomes as to see that the Rule of Law (as-Siyadah al-Qanuniyah) is upheld and not subverted.

In the same vein, the raison d’etre of the existence of a multi-party system, is to check and balance the excesses of the government of the day. This is also alluded by the many writings of Sheikh Yusuf al-Qardhawi.

This is critical in upholding one of the higher objectives of Islam and the Syariah (Maqasid) i.e. to avoid the authoritarian rule of the ruler, by subjecting them to constant check and balance.

It is in this context of embodying the objective of the principle of 'check and balance' (Sunan Tadaafuq), that debate and contest, during the legislative phase of turning a bill into law of the land, that legitimate dissent and debate be upheld and protected.

It is here that many a mufti or like-minded religious personalities, or lslamic political parties, have failed to grasp that a bill, either a private member bill or by the government of the day, is at best, a human endeavour to codify or legislate, perhaps at times, some textual principles of Islam.

While the original text may be divine (if it pertains to one quoted from the Quran or Hadith), the bill and its framing (construction), is an entirely a human intellectual endeavour or ijtihad at best.

Hence the process of legislation (at-Taqnin) must be subjected to critical scrutiny of all the legislators or law-makers (members of Parliament, both Muslims and non-Muslims alike) and it must ultimately be debated and endorsed or amended or even rejected as to finally promote the common good and benefit (jalbu al-masalih) and the protection from harm (dar’ al mafasid).

The proponent of a bill is fully aware that he must win his debate through compelling, persuasive and superior intellectual argument.

Hence it this sense, all legislative process must be totally engaging, civil and constitutional. No one shall take the moral high ground to represent God or even speak on behalf of God. No one shall be incriminated much less ostracised or excommunicated, for expressing his or her conviction.

The pronouncement or name-calling of someone who opposes or amends such bills as kafir harbi or munafiq or fasiq is thus entirely uncalled for and grossly misplaced.

At this juncture, l recall reading the book written by a celebrated judge, Sheikh Abdul Qadir Awdah; ‘Al-Islam: Between the Ignorant Followers and the Incapable Ulama’. The book aptly depicts the situation of the Muslim ummah now.

If this acrimonious debate is not addressed, God forbid, we shall witness many more similar recurring events and worse phenomena of Takfiri (excommunication and ostracisation) or name-calling of legitimate dissenting voices as kafir (infidels), munafiq (hypocrites) or fasiq (transgressors). One shudders at that thought and its untoward consequences.

I rest my case.