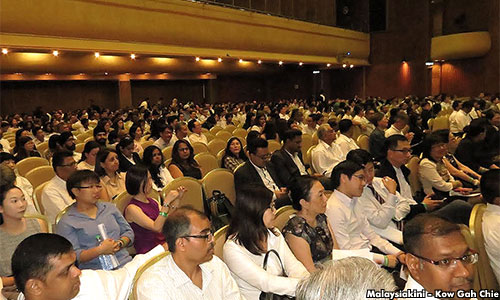 LPA amendments an open attack on independence of M’sian Bar

COMMENT Gabungan Bertindak Malaysia (GBM) and the following civil society organisations are gravely concerned with the decision of the government to make several amendments to the 1976 Legal Profession Act (LPA). Such amendments are open attacks on the independence of the Malaysian Bar and blatant violations of the right to freedom of association as guaranteed in the Federal Constitution.

It sets a dangerous precedent of government interference in the operations of independent statutory bodies and civil society organisations. We urge the government to withdraw such proposals immediately.

The amendments, due to be tabled in parliament in October 2016, empowers the government to abolish the current direct elections of 12 members of the Bar Council through postal votes and replace it with elections at the state level, the appointment of two representatives by the minister in charge of legal affairs to sit in the Bar Council and to increase the quorum of the annual general meeting of the Malaysian Bar from 500 to 4,000 members.

The government purportedly made the amendments to improve transparency and representation of the Bar Council, when in reality, it does the exact opposite.

First and foremost, these proposals were not mooted by the members of the Malaysian Bar. Furthermore, the proposed bill has not been made available either to the Malaysian Bar or the public. Hence, its claim of improving transparency and representation is highly questionable.

The proposal to raise the quorum of the annual general meeting to 25 percent of the membership or 4,000 members, smacks of ill intent. It is absolutely unreasonable and unrealistic, since the highest turnout for any of her AGM has not surpassed 1,910 lawyers, out of their 17,000 membership. It is designed to paralyse the functions of the Malaysian Bar.

We strongly urge the federal government and the attorney-general to withdraw the planned amendments and to respect the principle of self-regulation and the right to freedom of association of the Malaysian Bar.

It is the right of the members of the Malaysian Bar to choose her leaders and representatives, through a democratic electoral process. The government must not interfere nor impose conditions on this legitimate and transparent electoral process.

Endorsed by other non-governmental organsations: