As political battlelines continue to be redrawn in Malaysia, with allies turning into foes and vice-versa, an Umno leader has added another twist.

Sharkar Shamsudin asked if PKR dared to oppose DAP’s decision to hold a snap election in Penang, and join hands with BN to form a unity government in the state.

Sharkar, an Umno supreme council member, said if PKR prioritised the future and interests of the people, then it would remain steadfast in rejecting the snap election.

"Politics is about opportunities... Tun Mahathir (former prime minister Dr Mahathir Mohamad) himself once said, 'There are no permanent friends or enemies in politics'.

"Hence it is not impossible for PKR to work with BN to safeguard the interests of the people in Penang," he told Umno Online.

"Although there are ideological differences (between the parties), this thing (collaboration) is not impossible if PKR, like BN, wants to champion the cause of the people.

"However, the question is whether PKR has the courage to oppose DAP," he said.

Sharkar claimed that PKR president Dr Wan Azizah Wan Ismail’s statement that her party remained unconvinced of the snap election was to show that PKR is not a DAP stooge.

"If DAP insists on holding a snap election, it is certain PKR will once again become the victim... its seats will be given to Amanah, the party created by DAP.

"So the alternative route for PKR is to be with Umno and BN...

"If PKR lacks the courage (to oppose DAP), it will have to face DAP and its agenda to hold the snap election to continue the ‘Lim legacy’," he added.

Following the 2013 general election, DAP has 19 state seats while PKR and BN have 10 each, whereas PAS has one.

DAP claimed that Lim has been subjected to political victimisation and therefore wanted to seek a fresh mandate.

However, it is said that PKR risks losing in Malay-majority constituencies if a snap election is called. 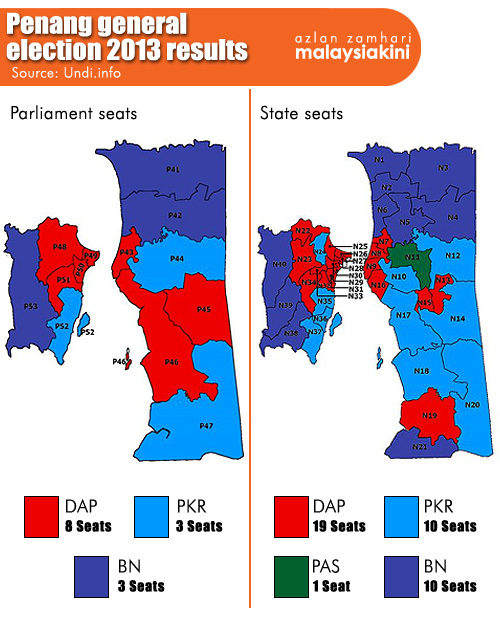