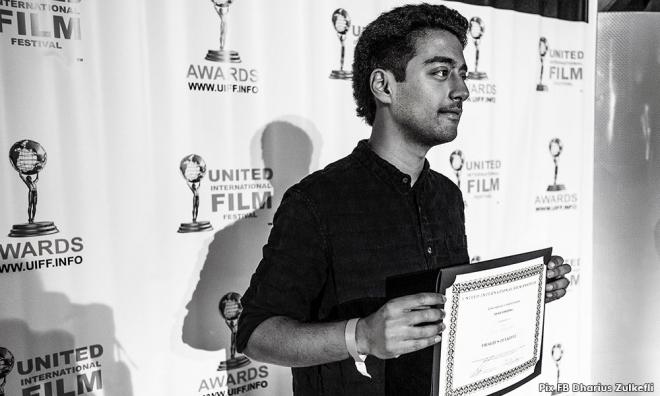 According to a report by creative newswire portal Kr8tif Express, 'Kun Fayakun' - which means 'be and it will become' in Arabic - was up against 45 other titles from across the world and the award was presented at the SVA Theatre on July 31.

Written, produced and directed by Dharius, 'Kun Fayakun' is a 20-minute psychological drama that tells the story of Henry, a man attempting to recover from a vegetative state.

In order to recover, Henry has to battle his inner demons and find salvation.

Throughout his struggle, he faces multiple challenges before he finally finds a way to recover.

On his inspiration behind the film, Dharius said that it originally stemmed from a conversation he had with his parents about 'choices' and how it was the greatest gift of all.

The conversation gave him the idea of a man trapped in a realm that is neither heaven nor hell, and he does not remember how he got there.

However, Henry realises that he needs to escape from the place that is not real.

The short film was completed in two-and-a-half months, with a line-up of actors including Ignacyo Matynia, Peyton Bristol, William Jousset and Ross Pivec.

Earlier this year, the 26-year-old had also reportedly worked with Ignacyo and Peyton on another short film, 'Fado', with future plans to screen both his films at various festivals in the United States.

"The film was created with dedication and passion. Even with minimal resources, I want to show that we can achieve recognition from the industry.

"Although I am a Malaysian in a foreign country, which can be intimidating, I am a true believer in the term 'Malaysia Boleh' and hopefully, with this belief, the film will continue to succeed in other film festivals," Dharius was quoted as saying by the portal.

Held from July 30 to 31 this year, the United International Film Festival takes place twice a year in Hollywood, California, and once a year in New York City, screening the works of filmmakers from across the globe.