MP SPEAKS An MRT ride from the Pasir Ris MRT station in the east to the Pioneer MRT station in the west costs approximately S$2. An LRT ride from the Gombak station (KJ1) to Putra Heights (KJ37) costs RM6.10. Why does the LRT ride cost three times more in Malaysia compared to Singapore on a dollar for dollar basis? The answer to this question is complex but let me propose a few possible reasons to explain this phenomenon.

1) Prasarana is unprofitable and has accumulated massive losses over time

Prasarana Malaysia Berhad is the 100 percent Finance Ministry-owned company which owns and operates the LRT and bus assets in the Klang Valley (as well as Penang, Kuantan and Kamunting) i.e. MyRapid. In Singapore, the rail services are mostly operated by SMRT while the bus services are mostly operated by SBS Transit (although there is a limited amount of competition between the two companies). 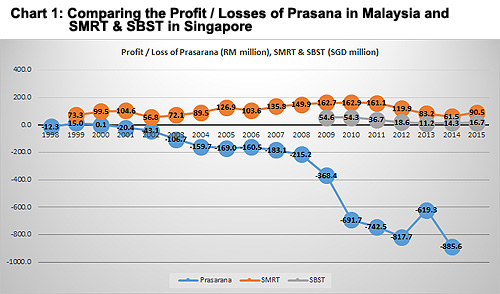 Given this, it is not surprising that Prasarana has accumulated losses of RM5.182 billion as of FY 2014 compared to S$741 million and S$261 million in accumulated profits for SMRT and SBST respectively as of FY 2015. (See Chart 2 below) 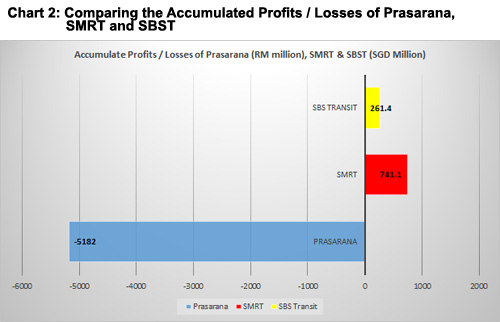 This is exactly what happened in December 2015 last year when the Land Transport Commission (Spad) finally approved the LRT and bus price hike which Prasarana had been requesting for many years.

It remains to be seen if the recent fare hike will help Prasarana get into the black but if it doesn’t, it would not be surprising if Prasarana asks Spad for another price hike in the near future.

But there is a far more important reason why Prasarana has been stacking up significant losses over the years and this has nothing to do with ridership numbers and all to do with the high financing costs to service its debt.

At the end of Financial Year 2014, Prasarana was carrying a total debt of RM13.6 billion. As a result of this high debt burden, it was paying out finance costs totalling RM399 million in 2014. Its financing costs was 81 percent of its total revenue of RM490 million. In other words, eight out of every 10 ringgit which Prasarana was taking in was being used to service its debt. And this is not even taking into account operational costs such as paying salaries and electricity bills. 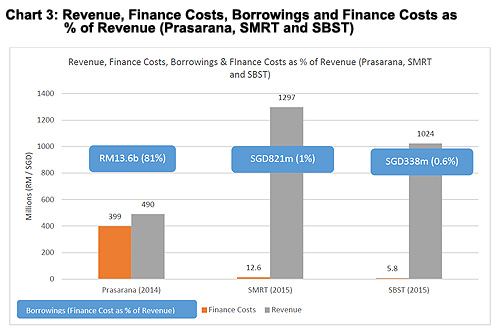 Prasarana should not be directly blamed for its high debt levels. Some of it was accumulated as a result of having to ‘bail out’ the companies which built and operated the Star and Putra LRT lines as well as the KL Monorail and also to buy buses from certain bus operators namely Intrakota, Cityliner and Putraline.

But at the same time, Prasarana needs to take responsibility for taking on excess debt as a result of expensive public infrastructure projects. For example, 70 percent of the cost of the RM634 million elevated Bus Rapid Transit (BRT) line in Sunway, Subang Jaya, had to be borne by Prasarana. At RM117 million per km, the 5.4km BRT must count as one of the more expensive BRT projects in the world on a km basis (approximately US$30 million per km).

Moving ahead, it is hard to imagine the fare rise at the end of 2015 helping to increase Prasarana’s profitability because of the continued increase in its debt. As of April 2016, Prasarana’s debt has ballooned to more than RM20 billion which will definitely increase its finance costs. So for those of you who are thinking that LRT or Rapid fares will remain where they are, you may want to think again.

Operators of public transportation often have to depend on other sources of income in addition to the revenue collected from ticket sales. These income sources are known as non-fare revenue which would include revenue from advertising, rental of space at LRT stations and even property development at LRT stations. Currently, Prasarana’s non-fare revenue is less than 15 percent compared to 28 percent for SMRT in Singapore.

Prasarana faces certain challenges when it comes to increasing its non-fare revenue. Advertising at bus stops, on buses and at train stations are regular income earners for public transport operators around the world.

In Malaysia, many advertisers are reluctant to advertise via these channels because of the perception that the middle class drive cars rather than take public transport. For example, most of the bus stops in the Klang Valley do not feature any advertisements, even in places where there is a high number of passengers.

From my conversation with some industry sources, it seems that advertisers would rather spend their money on big billboards along major highways to capture the ‘eyeballs’ in cars rather than to advertise on buses or at bus stops.

To overcome this challenge, Prasarana has to make it much more convenient for people to switch from their cars to public transportation which includes expanding its network of feeder buses, shortening waiting times for buses and making sure that taking the LRT during peak periods is not an unpleasant experience, to put it mildly.

Prasarana also has ambitious plans to increase property related income through its property development arm, Prasarana Integrated Development Sdn Bhd or Pride. The target is to achieve as much as 50 percent of revenue via non-fare sources by 2020.

One of Prasarana’s reasons for why it was always making losses is because the LRT fares had not been revised for 15 years. This is prior to the fare hike which took place in December 2015. One of the reasons why the quantum of the fare hike was so high (by more than 100 percent on some routes) is because Prasarana did not know when Spad would allow it to increase its fare again. So they decided to strike while the iron is hot and to maximise the fare increase.

Spad has done a very poor job in terms of fare regulation in Malaysia. There is little to no justification or explanation on how fares for various forms of public transportation are adjusted, usually upwards. It almost seems as if Spad bases its decision on how much of a rise in taxi or train fares the public can withstand or ‘tahan’. And then, it will wait for some time before fares are adjusted again.

This creates a vicious cycle whereby public transport operators will try to get the highest possible fare raise when Spad allows for a fare adjustment.

Singapore established a statutory body called the Public Transport Council (PTC) which has the power to regulate train and bus fares. It works close with but is separate from the Land Transport Authority (LTA) which is the equivalent of Spad in Singapore.

Since 2013, the PTC conducts an annual fare review exercise to adjust the bus and train fares based on a publicly-announced formula which includes inflation, changes in wages and the cost of energy.

Not only is this a more transparent way to determining the fare structure, in some cases, it can also result in the reduction of fares because of a drop in energy prices as was the case in December 2015. The fare adjustments are usually in small amounts so that public transportation users are not unfairly ‘hit’ by a sudden hike in prices.

The PTC also introduced progressive pricing policies such as distance pricing meaning that the cost of a journey is calculated based on distance regardless of whether you take a bus or train or both. This means that you won’t be charged extra if you change from a bus to a train or vice versa since it is part of a single journey you are taking, to work or to school, for instance.

It is not feasible or realistic to expect public transport operators to cover the high costs of constructing a rapid transit train line. What usually happens is that the government will pay for the costs of construction while expecting the operator to cover at least its operation costs and perhaps make a small operating profit.

Singapore has been moving to a model where the government funds the construction of the public transportation assets e.g. train tracks, rolling stock while a separate operator e.g. SMRT will run the services related to these assets. In a recent development under the New Rail Financing Framework (NRFF), the government will buy over all the operating assets of SMRT and then sign a long term contract with SMRT to run and operate the MRT services.

This means that the operator can fully focus on the running of the trains without having to worry about paying for new rolling stock or funding future train lines. The government benefits too because it can impose more stringent standards of efficiency and quality on the operator and fine the operator if these standards are not met.

In Malaysia, at least for the LRT, the funding of the previous and upcoming lines comes directly from Prasarana including the proposed LRT 3 line. This means that the debt of Prasarana will continue to grow as mentioned above.

One of the main reasons why the Malaysian government does not want to directly fund the construction costs of these public transportation projects is because of its budget position. Malaysia has been registering budget deficits since the 1998 Asian financial crisis (See chart 4 below). To assure foreign investors that government debts are manageable, the government has made a commitment to reduce its budget deficit to zero by 2020 and not to exceed a 55 percent government debt to GDP ratio. 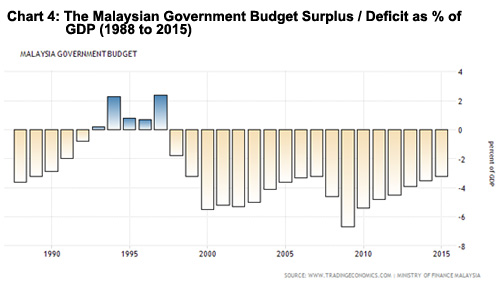 What this means is that the costs of financing public infrastructure projects have been shifted to government owned companies such as Prasarana. Prasarana’s debt is not registered officially as Malaysian government debt which means the government can continue to pretend that it is reducing the budget deficit.

The cost of this ‘pretence’ is that companies such as Prasarana will be forced to resort to increasing the amount of revenue it can extract from the ‘rakyat’ via measures such as fare increases.

The Singapore government is able to absorb the costs of public infrastructure directly because it has a record of running healthy budget surpluses with the exception 2009 and 2015 (see Chart 5 below). This is why the Land Transport Authority (LTA) was able to announce recently that it was buying the operating assets of SMRT at a price tag of S$1.06 billion. 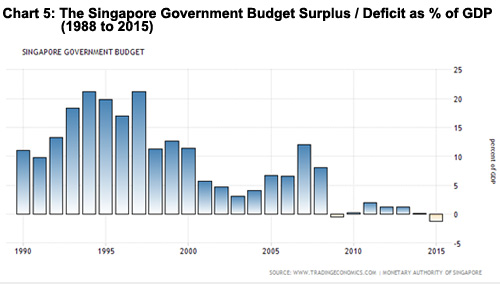 This does not mean that public transportation is all well and good in Singapore. The MRT system experienced serious breakdowns in 2011 and smaller breakdowns subsequently which ultimately costs two ministers of transportation their jobs. But in terms of affordability, Singapore is in a far better position compared to Malaysia.

What are the implications for public transportation users in Malaysia moving forward? Firstly, if there are no improvements in the manner in which the LRT and Rapid buses are financed and regulated, we should expect more increases in fare charges in the near future.

Secondly, we need to examine the business relationship between MRT Co, the owner of the new Sungai Buloh-Kajang (SBK) MRT Line 1, and the operator of the line, which will be Prasarana, to see its impact on the profitability of Prasarana as well as of MRT Co. MRT is not directly bearing the costs of construction the SBK line. A separate special purpose vehicle (SPV) called Dana Infra has been issuing government-backed bonds to pay for the construction costs.

MRT recently signed a 10-year lease agreement with Rapid Rail, a Prasarana subsidiary, for it to run the operations of the first MRT line. All the fares will go to Rapid Rail while MRT will receive revenue from advertising and rental. If Prasarana performs well, the MRT contract can help reduce its losses and perhaps reduce pressure to increase fares.

We have a long way to go before we can achieve Singapore’s affordable public transport pricing. One of the keys to getting there is knowing where we are at now.