MP SPEAKS One of the many things which engrossed and endeared me to Tony Blair’s memoir was these words: Freedom of Information.

And that was exactly how Blair put it: “Freedom of Information”

“Three harmless words. I look at those words as I write them, and feel like shaking my head till it drops off my shoulders. You idiot. You naive, foolish, irresponsible nincompoop. There is really no description of stupidity, no matter how vivid, that is adequate.”

Blair called it “such a thing so utterly undermining of sensible government”.

And anticipating protest from certain self-righteous quarters, he mused, “Oh he wants secret government, he wants to hide the foul misdeeds of politicians and keep from ‘the people’ their right to know what is being done in their name.”

I am not sure at this point if Penang or Selangor regretted their decisions to create the Freedom of Information Enactment (FOIE) in both states. I’d like to believe that the legislators of these FOIEs still stand by their earlier actions.

Truth is, the Penang FOIE is both a revolutionary and an evolutionary document. These are not mere cliché words, and I’ll explain why I say so.

The Penang FOIE is revolutionary because, in a country where government thrives on secrecy, where even in Parliament, an MP’s question may be ignored by a simple excuse that it is a ‘national secret’, or just outside of Parliament, an MP could be arrested right at the entrance because he “exposed state secrets”, the FOIE is indeed a radical move by both the Penang and Selangor governments.

Lest we forget, at the inception of the legislation in Penang, the former state legal adviser herself opposed the new law, claiming it is ultra vires the Federal Constitution.

But the state government’s commitment to Competency, Accountability and Transparency (CAT) ensured that the Penang FOIE was finally passed in 2012.

This is an important contrast we need to bear in mind when we speak of the FOIE. Within the context of Malaysia, Penang and Selangor have far surpassed any other state or federal government. Four years after the Penang FOIE, no state government, other than Selangor, nor the federal government has followed suit to enact such law. In fact, the situation seems to worsen at the federal level with new draconian laws being introduced to stiffen freedom of the people.

However, the Penang FOIE is also at the same time, an evolutionary document.

That is to say, it is still adapting, still changing and still evolving. Just like any laws, the FOIE should adjust to the context in our times.

But this also means, the Penang FOIE is not a perfect document. It inevitably has its weaknesses.

I am indebted to my friends in Sinar Projek for their excellent analysis of the strengths and weaknesses as well as their comparison between the FOIEs in both Penang and Selangor. While I think they missed certain fundamental strength of the Penang FOIE which I will point out throughout this article and the next instalment, I do agree with their conclusion that there are three key challenges with the Penang legislation:

In this first instalment, I will discuss the first challenge: obligation to publish.

The fundamental problem with information especially government information whether at the local, state or federal level is, information is by default a secret. This is no longer just words of the laws represented by legislations such as the Official Secret Act, but it has also become a culture especially in the civil service.

Go and request for a piece of information and more often than not, your request will be ignored if not rejected outright. We face this problem even as a government-linked think-tank in Penang when we are requesting seemingly neutral and ‘safe’ information such as, for example statistics for Penang’s import and export activities. The reason? The data has been misinterpreted by the public - hence, the federal government decided not to release it any more.

Both the preamble and Section 5(1) of the Penang FOIE is an acknowledgement of the people’s right to access information. Compare, however, between the original draft by the state legal adviser and the current FOIE which was passed by the 2012 legislative assembly. The Penang legislators clearly rejected the original draft in favour of a more right-conferring current version. 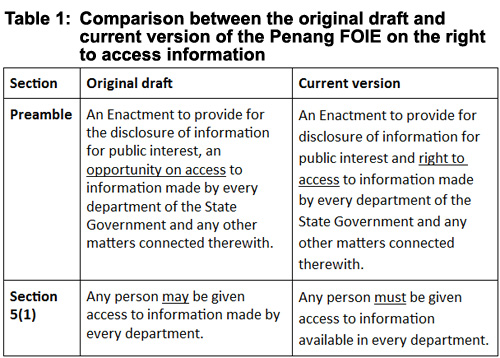 FOIE should be a measure of last resort

When the FOIE was being tabled at the Penang state assembly way back in 2011, the legislature established a select committee on FOIE to hear public opinion on these matter. I was part of the Penang DAP FOIE team which gave feedback at the select committee hearing together with representatives from other parties including the state opposition as well as civil society.

One of Penang DAP’s key recommendations was for “the Bill to make it a duty on government departments to adopt and maintain routine publications of important information such as annual reports and financial accounts”.

Receiving information through the Enactment is one aspect of the FOI, but it is not the whole of it. In fact, appealing to the FOIE for information should be a measure of last resort for the public.

An ecosystem of maintaining the integrity of information, efficient storing and access, security of a particular information and periodic publication of information in useable formats should form part of the government’s FOI effort.

In other words, the default mode for information should be changed from secret to public.

This is where the Penang FOIE can be further improved. It must be a catalyst to transform the culture of secrecy to one of openness and transparency when to comes to government information.

Perspective - FOIE is not an additional obstacle to access information

Recently, our friend from Sinar Projek complained that an officer-in-charge not only hesitated to provide information but viewed his request with suspicion. The old culture of secrecy must be abolished.

My own staff while requesting for licensing information about entertainment outlets in my constituency from the local council were told that there should be formal application as these fall under the FOIE. Previously, I could easily obtain those information via an e-mail request to the mayor.

From January 2015 up till June 2016, the highest number of FOIE applications was to the Syariah Court to obtain documents such as court orders and Muslim inheritance certificates (faraid). These documents do not need to go through FOIE previously.

What is happening here is obvious - FOIE becomes an additional bureaucratic instrument, and at times, most unfortunately, works counter to its purpose; it becomes a new obstacle to getting information previously easily obtained.

It cannot be emphasised enough that FOIE should be a measure of last resort when it comes to the right to access public information. In other words, the normalcy should be, information is readily available and easily accessible.

Public request for information should be fulfilled without hesitation, and once again, FOIE is only a measure of last resort.

In fact, the 2012 legislators removed the original Section 6(1)(a)(iii) which imposed the requirement to state the “reason and purpose of the application” for information. The removal of this section was one of DAP’s recommendations. A similar clause is still in the Selangor FOIE under Section 6(2)(d).

Basically by removing the section, the original legislators reaffirmed that access to information is a right, not a privilege, hence there is no need to state one’s purpose when applying for information under the enactment. Thus, cases where applicants were asked for reasons for their application should not have happened, including in the infamous statutory declaration which I will discuss when we deal with the cost of access.

Civil servants must be inculcated with this new culture of accountability and transparency.

Beyond data collection, the biggest challenge is to revamp the IT system in the government.

A government-wide integrated IT policy needs to be in place in order for a proper management of information, from capturing and storing to transmitting and displaying. My experience with local council is that, each department has its own IT vendor and often the different systems cannot be integrated. This needs to change.

Perhaps, for a start, each department should publish their respective annual report online together with budgetary and financial information. But this cannot be the final aim. Data and information published must be portable, and easily formattable. This can only happen with a good IT policy.

STEVEN SIM CHEE KEONG is the MP for Bukit Mertajam and a director of the Penang Institute. In 2011, he represented Penang DAP to present views to the state assembly select committee on FOIE.