The woman, 58, is the mother of a female patient infected with the virus in Singapore, Health Minister Dr S Subramaniam said.

Although she displays symptoms of Zika infection, the case is classified as "suspected infection" as her blood test is pending.

A urine Polymerase Chain Reaction test conducted on the patient at the Sungai Buloh Hospital on Aug 30, was positive for the Zika virus, he said.

The patient, who lives in Bandar Botani, visited her daughter in Singapore on Aug 19 and returned to Malaysia on Aug 21.

She displayed symptoms of a rash on Aug 28 and sought medical attention at a private clinic on Aug 30, where the general practitioner diagnosed her with suspected Zika infection.

She had from Aug 21 to 28 also visited various areas in the district of Klang and Kuala Lumpur.

"Based on the findings from the investigation, the ministry has already started vector control activities in the residential area of the case and other places that the patient had visited.

"In addition, close contacts to the patient will be examined (to see) whether they have any fever or other Zika symptoms," he said.

He said five Malaysians working and residing in Singapore have been confirmed infected, with Singapore reporting a total 115 cases as at yesterday.

"Due to the rapid spread of the Zika virus infection, Aedes monitoring and preventive activities are continuously performed and intensified in all states, especially in the state of Johor and Selangor," he said in a statement.

He told reporters in Putrajaya today that the ministry will not issue a travel advisory barring Malaysians from going to Singapore.

"About 200,000 Malaysians travel to and from Singapore daily. They have been advised to take prevenive measures, including appling mosquito repellents as often as possible," Bernama quoted him as saying.

Those driving to Singapore are advised to spray repellent in their vehicles to avoid inadvertantly bringing back carrier mosquitos.

"We have also advised pregnant women to seek clarification from medical specialists as the disease posed a high risk to their babies," he reportedly said.

There are 16 government medical centres, besides private laboratories with facilities to detect the Zika virus. 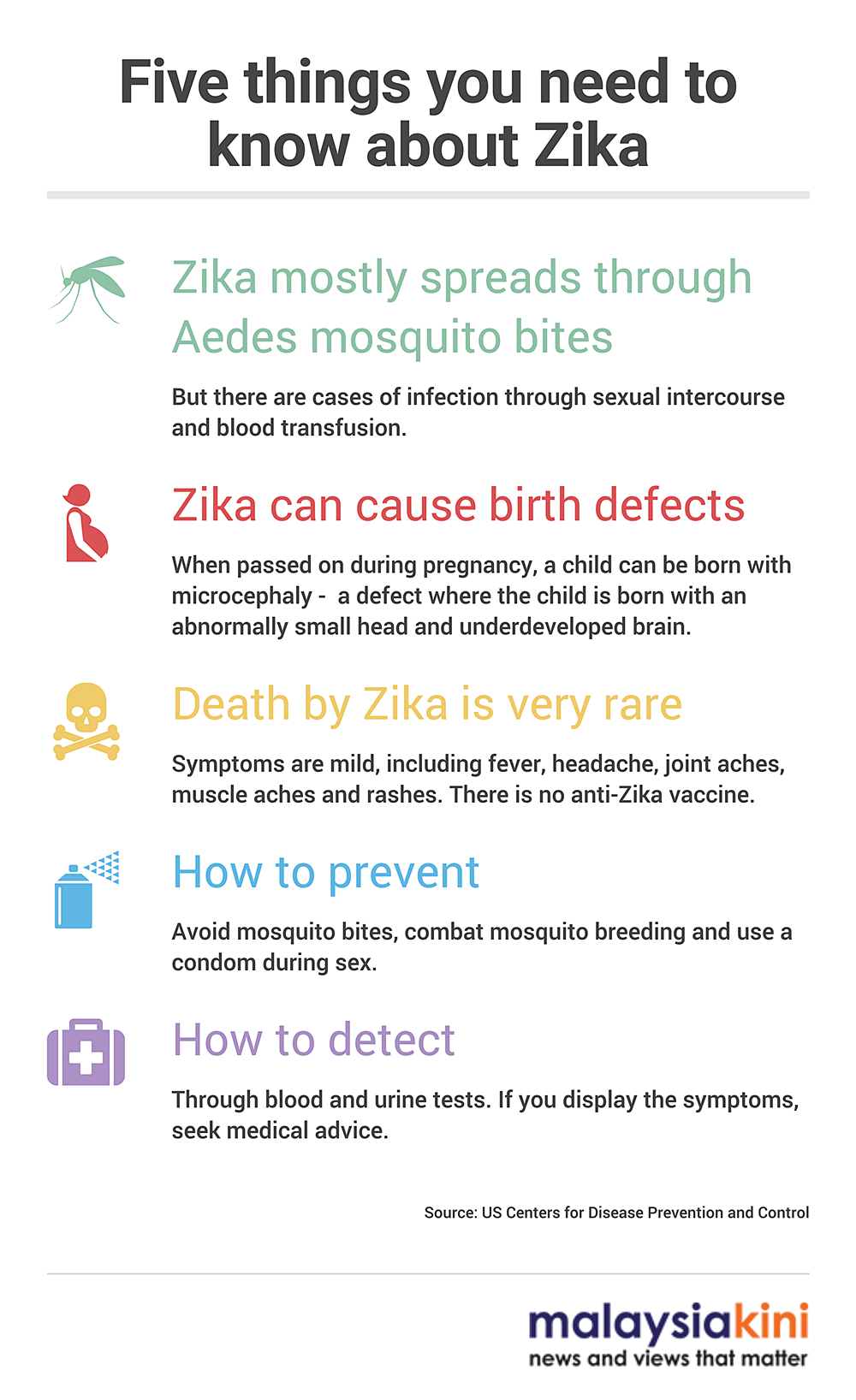 Singapore yesterday reported that a pregnant woman is among those diagnosed as infected with the Zika virus.

The virus can be passed from a pregnant woman to her fetus, with infection during pregnancy causing risk of microcephaly, a birth defect where the child is born with an abnormally small head and underdeveloped brain.

The virus is most commonly spread through mosquito bites, with reported cases of infection through sexual intercourse and blood transfusions.

"People usually don’t get sick enough to go to the hospital, and they very rarely die of Zika.

"For this reason, many people might not realise they have been infected.

"Symptoms of Zika are similar to other viruses spread through mosquito bites, like dengue and chikungunya," the United States Centers for Disease Control and Prevention fact sheet reads.