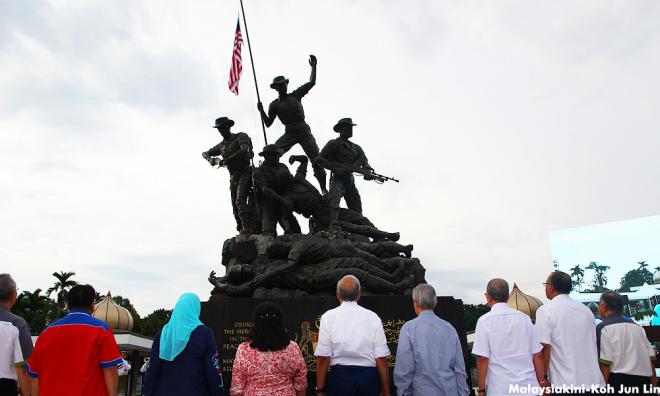 National Monument to be part of RM650m iconic rainforest park

The National Monument (Tugu Negara) in Kuala Lumpur and its surroundings are to receive a RM650 million boost in a bid to turn the 66-acre area into an urban rainforest park.

The project would be led by the sovereign wealth fund Khazanah Nasional, which would foot RM500 million of the bill.

Prime Minister Najib Abdul Razak, who launched the Taman Tugu project in a ceremony at the monument today, said the first phase of the project would be completed in mid-2018.

He hoped that the ‘mini tropical forest in the city’ would become an iconic part of Kuala Lumpur.

“One of the features of a global city is social development, towards setting up recreational facilities and green lungs.

Once the park is completed, he said, each world leader on official visit to Malaysia would be invited to plant a tree in the park as part of the visit.

Although Khazanah has already conceptualised the park, Najib said Khazanah is still open to public feedback on how the park should turn out.

According to a press release, the project would entail the conservation of 1,000 trees, and the planting of 5,000 more trees indigenous to Malaysian rainforests.

Walkways would also be set up to offer accessibility to the park, including via the Bank Negara KTM Komuter station, and via KL Sentral through several landmarks.

In addition, facilities such as food and beverage stalls, children's play areas, event spaces, and educational facilities would be built and opened to public.

Apart from Khazanah, some of the project partners involved include Kuala Lumpur City Hall, Forest Research Institute of Malaysia (Frim), the Department of Environment, the Malaysian Nature Society, and many others.

Final completion of the project is slated for the year 2020.

The project comes amid controversy over statues of living beings, which is considered ‘haram’ in Islam.

The issue had been brought under renewed focus after Perak deputy mufti Zamri Hashim wrote in a column that the construction of such a statue, referring to a particular statue of an eagle that he did not specify, was haram.

The National Monument comprises bronze statues of a group of soldiers, with one holding a flag pole where the Jalur Gemilang is flown during daylight hours.

It was unveiled in 1966 to commemorate those who had perished during the Malayan Emergency.

At 15 metres tall, it is the tallest freestanding bronze grouping of statues in the world.