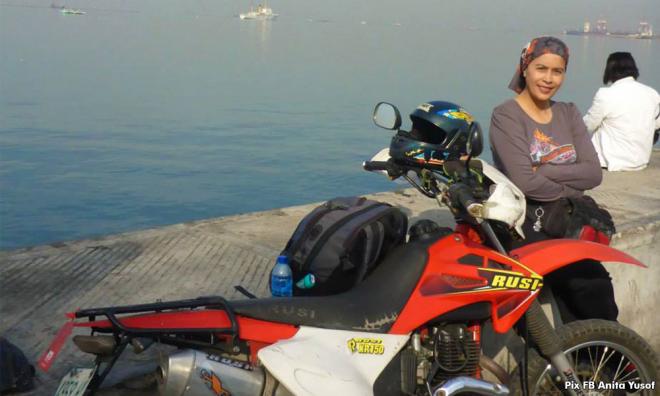 ‘If Islam oppresses women, why am I riding solo around the world?’

After riding solo on a motorcycle for 370 days, crossing over 40 countries in four continents and covering a distance of 65,000km, Anita Yusof is just a country away to complete her mission.

Although her main motivation was to make Malaysia proud, the Institute of Teachers Education lecturer said the mission was also aimed at correcting the negative public perception of Islam and women in Islam.

“Too many people have become Islamophobic and think of Islam as the religion of terrorists, that Islam is rigid and discriminates women and that Islam does not allow women to study or work, and other negative perceptions.

“If they say Islam is rigid, oppressing women to the extent of not letting them to study, then how come I am going around the world riding solo on a motorbike,” she told Bernama in Bangkok today.

Anita is now here in the last leg of her solo mission, and is expected to arrive at the Malaysian border in Bukit Kayu Hitam at 11 am on Friday, in conjunction with the Malaysia Day celebration.

Anita, who took one year of unpaid leave and spent over RM100,000 from her own pocket for the mission, will be recognised as the first Malaysian Muslim woman to ride solo on a motorcycle around the world.

She is also probably the first motorcyclist from Malaysia or even the first Asian woman to do so.

“I’m so proud because the first Muslim woman to have managed to ride solo on a motorcycle around the world, comes from a small country called Malaysia,” said Anita, who also lost 10kg of her body weight throughout the mission.

She added that riding on Route 40, facing the winds from the Atlantic and Pacific Oceans, while heading to Ushuaia, Argentine, as well as the bear and tiger routes in Alaska and Vladivostok, Russia, were the most challenging experience for her.