Can four be ‘approximately equal’ to one?

COMMENT Decent Malaysians are angry over the unscrupulous redelineation proposal unveiled by the Election Commission (EC) on Sept 15.

However, anger without action does not lead to anywhere. And if the EC proposal is passed – which takes only a simple majority in the Dewan Rakyat to do so – the outcomes of the next two to three general elections are more or less determined. Then there is a good chance you may still call Najib Abdul Razak your prime minister at 2020.

What actions are we talking about here?

First, state governments, local authorities and any group of 100 or more affected voters should file an objection within 30 days (by Oct 14 for the first round) and then argue the case in the local inquiries held by the EC. (For a technical guide on how to raise an objection, please visit dart.bersih.org)

However, as the inquiry process is basically controlled by the EC, objectors must be prepared to take it to the court of law.

Last year, the EC was taken to court for providing insufficient information on the redelineation exercise in Sarawak by lawmaker See Chee How and constituent Paul Baya.

While they eventually lost their case in the Court of Appeal and the Federal Court after winning it in the Kuching High Court, the prospect of legal suits alerted the EC to the possibility that the redelineation process may not be completed by the two-year deadline imposed by the Federal Constitution.

Before winning in the court of law, the argument must first win in the court of public opinion. In other words, the constitutional arguments must make common sense so that the people and judges would know how the EC has violated the Federal Constitution and must be stopped.

There are two key forms of manipulation in redelineation: firstly, malapportionment which is uneven electorate size across constituencies, and, secondly, gerrymandering which is manipulation on the composition of the electorate.

Here we shall focus on intra-state apportionment, of both parliamentary and state constituencies, which is governed by Section 2(c), Part 1, 13th Schedule of the Federal Constitution which stipulates that:

“The number of electors within each constituency in a State ought to be approximately equal except that, having regard to the greater difficulty of reaching electors in the country districts and the other disadvantages facing rural constituencies, a measure of weightage for area ought to be given to such constituencies.”

This was the outcome of the 1973 constitutional amendment which altered the 1962 version:

Mathematically, that means a plus or minus 33.33 percent deviation from the state average. From 1957 to 1962, intra-state apportionment was governed by Article 116(4) which stipulated that the electorate size in any constituency could not differ from the state average by more than 15 percent.

In other words, quantitative limits of malapportionment had been lifted from 15 percent in 1957 to 33.33 percent in 1962 and then completely removed in 1973.

The “measure of weightage for area” in Section 2(c) is left hanging there awkwardly after the removal of clause “to the extent that in some cases a rural constituency may contain as little as one half of the electors of any urban constituency.”

This has been insidiously used by the EC to deliberately misinterpret Section 2(c) to create an unconstitutional guide of malapportionment as shown in the table below, which divides constituencies into five categories: metropolitan, urban, semi-urban, semi-rural, and rural. 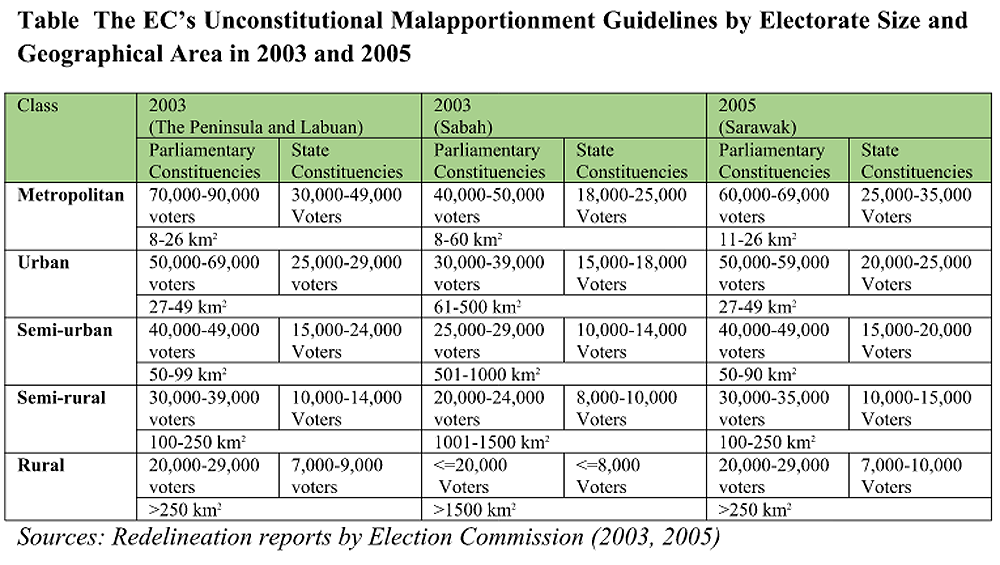 Importantly, no definition whatsoever was given to measure the degree of urbanisation. This allowed the EC in the 2003 redelineation exercise to make the hilly Baling a metropolitan constituency (72,387 voters) and the state capital Alor Setar a small town with only 56,007 voters.

The EC does not dare to publish its unconstitutional malapportionment guide anymore after being exposed and slammed by civil society groups like Bersih. Nevertheless, the perverted malapportionment which gravely under-represents Baling still persists in the current redelineation proposal.

To stop the EC from rigging the redelineation process, we must go back to Section 2(c). It does not provide for perfectly equal apportionment but it is a reasonable one that we may fall back on.

The phrase “approximately equal” and the word “area” in “a measure of weightage for area” must not be forgotten. 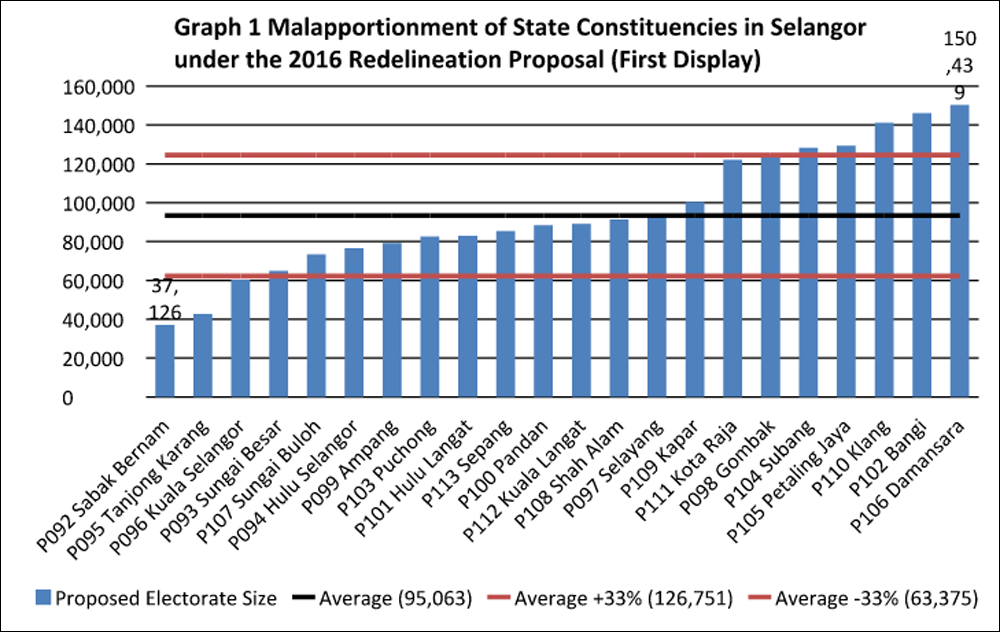 Now, take a look at one of the worst malapportioned states, Selangor. The proposed electorate for Damansara, 150,439 is 4.05 times that of Sabak Bernam, 37,126.

Can the EC chairman Mohd Hashim Abdullah even convince a kindergarten kid that “four is approximately equal to one”?

Does he expect our judges to rule in his favour and tell the world that “in Malaysia, four is approximately equal to one”?

Let us be very clear. When the 33.33 percent limit was set in 1962, it was meant for extreme cases, as expressed clearly by the clause “to the extent that in some cases a rural constituency may contain as little as one half of the electors of any urban constituency.”

The removal of the “as little as one half” standard in 1973 then may only be interpreted as that in extreme cases, with justification, the largest constituency’s electorate size can even exceed slightly twice that of the smallest constituency.

And any significant deviation from the average must be grounded in geographical area. Here, the EC insidiously omits in the redelineation proposal information of constituency land mass, which is always provided in its final report to Parliament.

However, since Sabak Bernam is excluded from the redelineation process this round, we know its area size is only 335.08km2. If Hulu Selangor with the land mass of about 1,718.40km2 (before redelineation) can have 76,599 voters, what warrants Sabak Bernam to have less than its half? 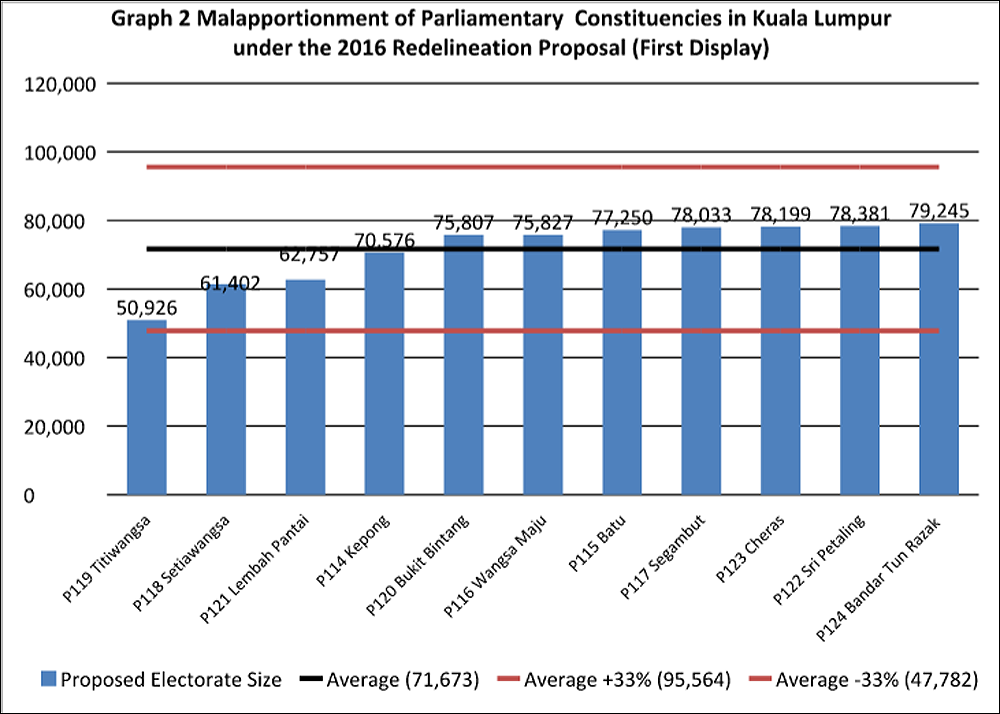 Now, let’s look at the less-malapportioned Kuala Lumpur. None of its 11 parliamentary constituencies exceeds the 1962 standard, namely, approximately 33.33 percent from the average. (Graph 2)

However, we must ask, why does Bandar Tun Razak have 79,245 voters while Titiwangsa has only 50,926 voters? The entire Kuala Lumpur is urbanised, so what are the grounds for a ratio of 1.56:1? Is the EC telling us even in normal circumstances, 1.56 is approximately equal to 1?

We at Penang Institute have prepared a comprehensive analysis of malapportionment in both the current redelineation proposals for the Peninsula and Sabah and the redelineation exercise in Sarawak last year. The 151-page report which contains 108 charts, 14 maps and 5 tables can be downloaded at:

We hope more people will find out for themselves what is “approximately equal” to one in their own state and take that common sense question to the redelineation inquiries and, if necessary, court of law.

We must all ask so that the EC chairman would hear such questions even in his dream:

“Is four approximately equal to one, Mr Mohd Hashim?”