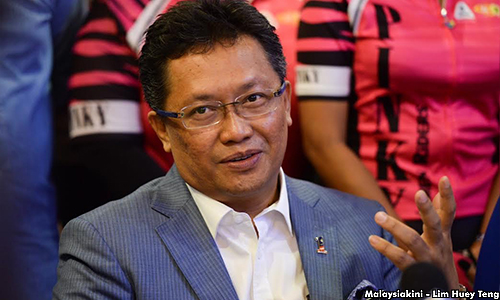 I told you so, says Rahman Dahlan of Leiking's PKR exit

He reminded them that he had long told them that former premier Dr Mahathir Mohamad, sacked deputy PM Muhyiddin Yassin and former minister turned rebel Shafie Apdal will only eat into existing opposition support base and not expand their influence into Umno's Malay heartland as intended.

"I said this before. TSMY (Muhyiddin), TunM (Mahathir) & DSSA (Shafie) will only cannibalise support from current opposition. The defection of PKR's MP Penampang proved it!" he tweeted today.

The Kota Belud parliamentarian sniped that this will certainly make things awkward around the proverbial opposition dinner table, when they sit down together again, if ever.

"Let's see if (PKR deputy president) Azmin (Ali) will still cozy up to Tun M despite Tun and his team stole his very own MP.

"Pity. While Azmin is mesmerized by Tun's antics, Tun's associate in Sabah pull a fast one on his party & stole his MP right under his nose!" he tweeted further.

"Or will PKR president, DSWA (Wan Azizah), reprimand Azmin for being easily blind-sided by Tun M and his team," he said.

As for the new opposition-friendly party which will soon be reconstituted by Shafie from a local Sabah party, Rahman wished the former minister all the best.

Though he said that the state BN will also redouble its efforts to fight for the interest of Sabahans.

Rahman said that there is no place in Sabah for seasonal parties that formed only to represent the interests of certain quarters, as the people of the state will reject them.

The MP added that Sabah BN will also be there to scrutinise if the policies of the new party led by Shafie will differ from what he espoused when he was in BN.

"If their response differs widely with what they said before, for sure the rakyat of Sabah can question the integrity, consistency and seemingly ever changing principles. Let us wait and see what's next," he said in a statement.

In a shocking move yesterday, Leiking quit PKR to join with Shafie in his new Sabah-based political platform. This took many opposition figures by surprise and became ammunition for the BN fusillades against the opposition.