Communications and Multimedia Minister Salleh Said Keruak has pointed out the irony in Dr Mahathir Mohamad referring to those who support Prime Minister Najib Abdul Razak as 'Little Goebbels'.

"Ironically this was what they also used to say about those who worked for Mahathir when he was prime minister," Salleh said of the reference Mahathir made to the Nazi propaganda chief Joseph Goebbels.

"In fact, they also used to refer to Mahathir as 'Hitler', meaning a megalomaniac leader who accused his number two of sodomy as an excuse to get rid of him," Salleh added in a blog post today.

Mahathir's then deputy prime minister, Anwar Ibrahim, had been accused of sodomy in 1998, and was subsequently jailed on what many critics said were politically motivated charges.

Anwar had been challenging Mahathir, accusing him of corruption and nepotism.

Mahathir had made the reference to Goebbels in a blog post yesterday, which took shots at those who defended Najib. 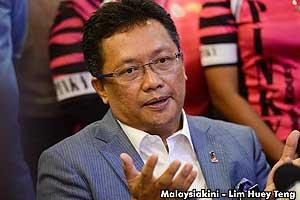 Meanwhile, Minister in the Prime Minister's Department Abdul Rahman Dahlan (photo) said Mahathir's remarks were an embarrassment to Malaysia, especially as Najib was in Germany on a working visit.

"He (Mahathir) has caused disgust and offence in Germany, which last year was the largest European investor into Malaysia. Total German investment is US$11.4 billion.

"In contrast, (Najib) has been an honoured guest of (German) Chancellor Angela Merkel, fighting to further the economic and security interests of Malaysia and its people," Rahman wrote on Facebook.

He added that Najib's trip to Germany also proved that Mahathir's allegation that Malaysia is becoming a failed state was false.

On a separate matter, Mahathir had also said that some bloggers on his side had now switched allegiances to support Najib.

On this, Salleh said these bloggers were originally aligned with Mahathir's son, Mukhriz, and they knew of the alleged plans to make Mukhriz the prime minister.

"Yet they abandoned Mukhriz in 2015, which says a lot about their confidence level.

"Mahathir says these bloggers have been bought. Anyone who does not support Mahathir 'makan dedak' or has been bought.

"Is he saying that all those who support him do so also because they have been bought?" Salleh asked.

The Sabah Umno leader also criticised Mahathir for maintaining his innocence by saying that allegations made against him back when he was in power had gone unproven.

"But when it comes to Najib, Mahathir says the PM must prove his innocence."

Salleh ended his blog post by noting that the former prime minister sounded "worried", and was always a bad judge of character.

Mahathir is embroiled in a bitter feud with Najib, constantly accusing Najib of corruption.

Najib has denied these allegations, saying these are part of a plot to topple him.