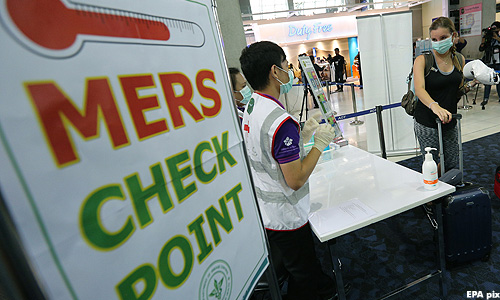 Southern Thailand on alert for Mers cases after haj season

Health authorities in Thailand’s Muslims-predominant southern border region have been on alert to prevent any outbreak of the Middle East Respiratory Syndrome Coronavirus (Mers-CoV) from people who have returned home from this year’s haj pilgrimage in Saudi Arabia.

Dr Uthitsak affirmed that his province’s public health specialists have developed a practical screening system against Mers-CoV and have worked closely with local immigration authorities to screen and prevent suspected patients as of their arrivals at a local airport.

Once any suspected case is found to have symptoms, such as fever and body ache, he or she must be quarantined for a thorough medical check-up with a confirmed result set within 24 hours.

According to the provincial public health chief, there have been 16 suspicious cases in Yala so far, but none have been tested contracting Mers-CoV, with 11 of them confirmed to have been influenza cases instead.

The provincial public health chief acknowledged that people who have passed the strict screening system and allowed to go back home must be under a close watch of doctors for additional two weeks. They need to always wear their face masks and avoid close contacts with other people untill the observation period ends.

The provincial public health chief advised those who are under the observation period to immediately report themselves to local authorities if they experience lingering suspicious symptoms.

Nine hundred and seventy six out of a total of 1,072 Thai Muslims who have travelled to Saudi Arabia for the haj this year live in Yala.