In fact, the emergency landing incident involving a Nuri helicopter in Tawau on Tuesday should not be viewed negatively. The helicopter is still able to carry out its tasks in search and rescue operations and military exercise assignments.

Universiti Kuala Lumpur (UniKL) test pilot Prof Mohd Harridon Mohamed Suffian said the Nuri was now still serviceable, but it could not be used that often, as that would result in wear-and-tear.

"Nuri services should be rotated with RMAF's new aircraft. For instance, the United States (Air Force) is still using its 40-year-old Skyhawks to train pilots for acrobatic flights," he told Bernama.

Mohd Harridon was commenting on the emergency landing incident whereby a Nuri landed on the roof of an open hall of SMK Balung, injuring 22 people, including 13 RMAF personnel, eight students and a cleaner.

The Nuri is RMAF's utility helicopter involved in various military operations and has been in use since 1967.

Harridon said given the number of years in service, the Nuri had its fair share of of wear-and-tear.

"This is a technical factor. However, if continuous maintenance is done comprehensively, old helicopters like Nuri are still safe to fly," he explained.

Commenting on the incident, Harridon said there were several possibilities that could have led to it, such as engine problems and wear and tear.

Meanwhile, former pilot Capt (Rtd) Abdul Rahmat Omar Mohd Haniff said Nuri was still needed as it was now among the RMAF's assets inducted into the Malaysian Army Aviation Team for the purpose of air mobility.

"The age of an aircraft does not necessarily matter if the maintenance is good," said the former RMAF pilot.

Abdul Rahmat said the move by RMAF to replace Nuri in stages before this was not due to age or maintenance issues.

He said it was done in view of the roles of the RMAF such as combat search and rescue, and the insertion and extraction of special forces, which require more specificialised helicopters.

Abdul Rahmat added the Defence Ministry must ensure that the RMAF was granted the budget to maintain the Nuri as well as its other assets properly. 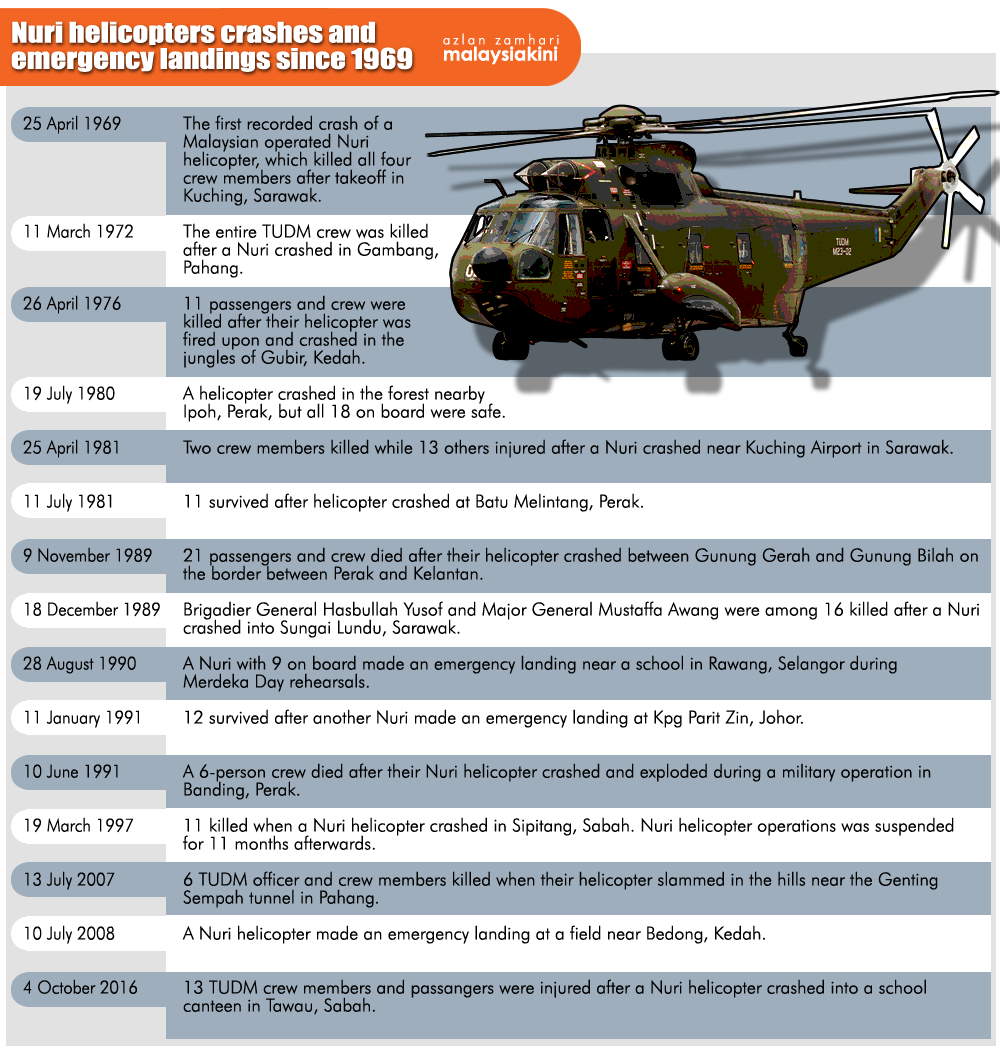