It is often necessary to dig deep into the budget in order to understand the financial and policy implications of some of these items. I call this ‘reading between the lines’ of the budget. To make this exercise easier to understand, I have divided these spending items into different categories.

For each of the items listed below, I will also explain their impact on the target groups.

Given the size of the budget (RM261 billion for 2017), it is not surprising that there are thousands of expenditure items that are listed in the budget estimates document that accompanies the budget speech.

But the majority of these items, even if the amount is big, they are usually items that were already in existence in previous budgets.

For example, line 225 of the budget speech outlines a number of assistance programmes to poor children in primary and secondary schools such as RM1.1 billion for the Hostel Meal Assistance Program and RM300 million for the 1Malaysia Supplementary Food Programme for primary school students (Figure 1 below).

The budget expenditure estimates for the Minister of Education show that all of these are pre-existing programmes and that the 2017 budget allocation is not significantly different from the 2016 allocation. 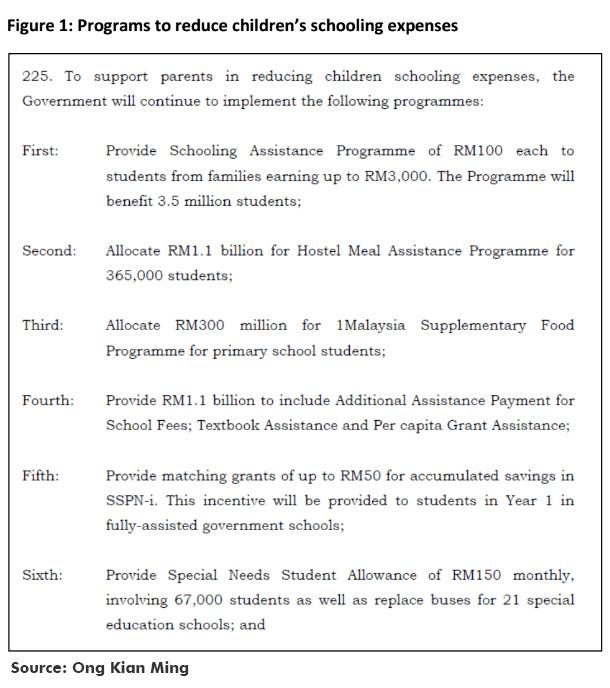 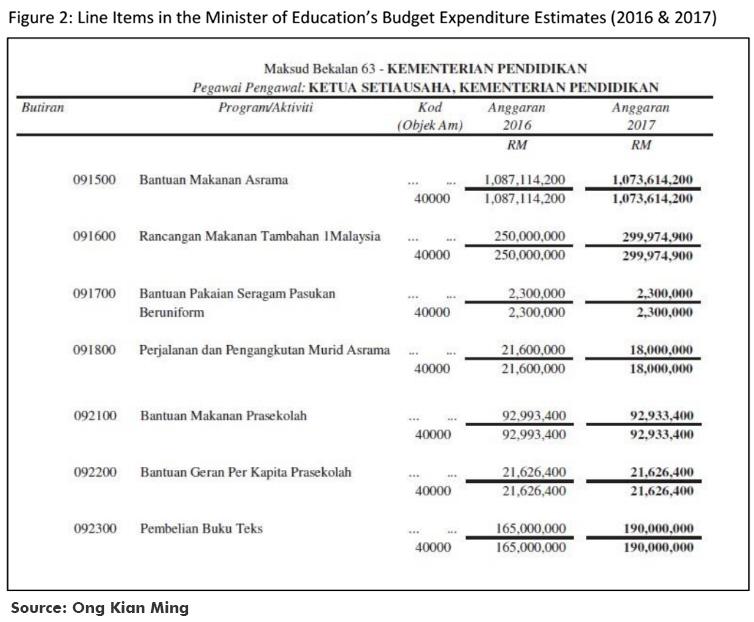 The expenditure cuts to the public universities are just one of the many line items which have experienced significant allocation reductions. A more thorough analysis of the budget estimates will reveal more of such items.

This clearly shows the underlying situation of a government under tremendous financial strain.

Category 3: Allocations that are no longer in the budget

While many people will pay attention to the items that were announced by the prime minister, perhaps as much care needs to be given to items that were NOT announced and have been taken off the budget entirely.

For example, in the 2016 budget, a ‘one-off’ payment of RM593 million was allocated to compensate the toll concessionaires for deferred toll hikes under the works minister.

However, this item has totally disappeared from the 2017 Budget!

This can be seen in the significant drop in the fixed charges and payments expenditure from RM603 million in 2016 to a mere RM385,000 in 2017. This means that there will almost certainly be more toll hikes including on the Plus-owned North-South Expressway in 2017, a contravention of BN’s GE13 manifesto promise.

Another item that has disappeared from the budget estimates is the cooking oil subsidy. The Cooking Oil Stabilisation Scheme (COSS) subsidy is under the Commodities and Plantations Ministry but there is no such line item for this programme in the 2017 budget.

So contrary to the promise of the Second Finance Minister, Johari Abdul Ghani, there is no indication that this subsidy programme will continue under the 2017 Budget.1

It is almost certain that there are other items that have been taken out of the budget entirely which will have a direct impact on the cost of living of voters.

Category 4: New allocations which are ‘dubious’ in nature

There was much speculation that our healthcare budget would be cut in the 2017 budget. I was pleasantly surprised when I saw that the operational expenditure for the health minister was actually increased from RM21.4 billion in 2016 to RM 23.4 billion in 2017, an increase of RM2 billion.

But when I examined the budget estimates for the Health Ministry, I was shocked to find a special programme called 'Privatisation of Hospital Support Services' costing RM2.01 billion for 2017!

As far as I know, the ministry has not made any announcements on the privatisation of support services (much of which is sub-contracted out now anyway). And the prime minister did not make any mention of this new item in his budget speech.

How can such a large expenditure item make its way into the budget without any further clarification? How many other such items will we find in the budget estimates?

Category 5: Announced expenditure which are not in the 2017 budget

Just like the expenditure on the MRT Line 1 and the LRT Extension, these infrastructure projects will be funded by special purpose vehicles (SPVs) that will borrow money under their own balance sheet.

The problem with such a model of financing is that it hides the true burden of expenditure on the government. Many of these projects will not be able to pay for the capital expenditure and the related interest expenses. Which means the government will eventually have to step in to service the debt of these SPVs.

When that happens, the squeeze on the government will likely result in a steep increase in the GST rate in order to help the government ‘bail-out’ these SPVs.

An initial reading between the lines of the 2017 Budget has already raised many questions regarding items that are present as well as those which are absent from the budget estimates. I am sure that other items will be discovered as more MPs analyse and investigate the details of the 2017 ‘stealth’ budget.