MP SPEAKS Since the last general election, Najib Abdul Razak has successfully managed the investment community’s perception of the “prudence” of the budget with declining budget deficits, albeit at a snail’s pace.

Despite the fact that Najib will never achieve his zero deficit target in 2020 at the current snail’s pace, credit should be given to the finance and prime minister for the moderating deficit in the light of difficult economic conditions - that is, if the deficit figures truly reflect government spending.

Even for a non-economist, you might raise an eyebrow as to whether the deficit decline looked too “uniformly smooth” in a choppy global economy. If you think that the numbers look too good to be true and have been manipulated, you are absolutely right.

In practically every budget in recent years, Najib had announced multiple multi-billion ringgit projects such as the LRT Extension Project, the MRT I and II Projects and soon, the proposed High-Speed Rail and the RM55 billion East Coast Railway Link.

However, these spending were never reflected in the government budget expenditure which showcased the “prudent” budget deficits. Where did these massive spending disappear to?

You will find part of the answer in the Non-Financial Public Corporations (NFPC) Financial Position (Table 6.13 p161 Economic Report 2016/7). 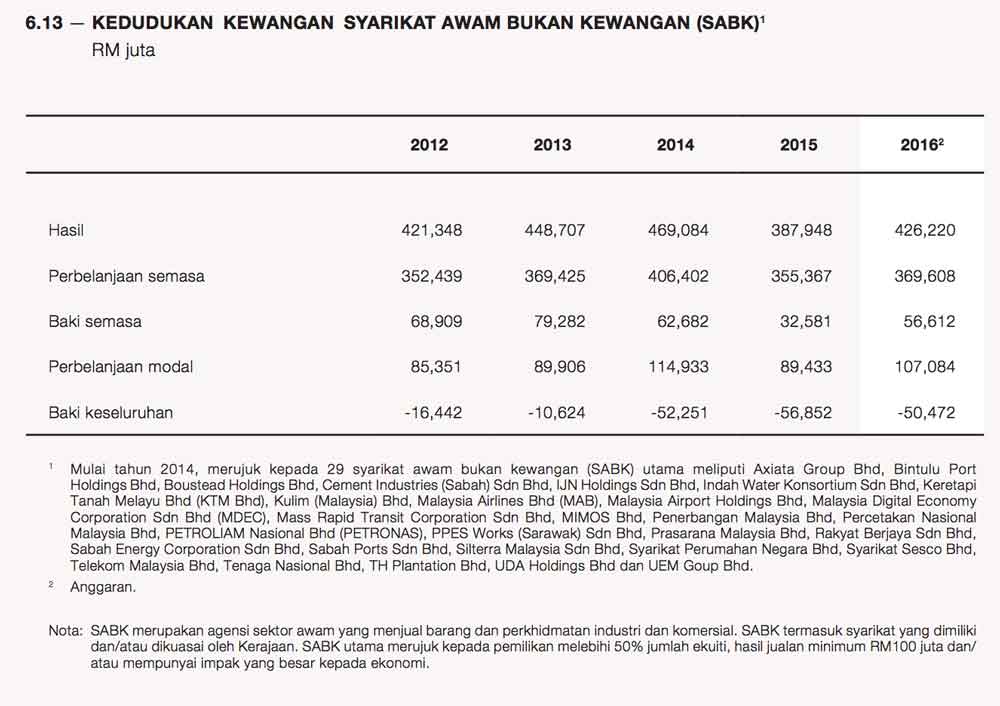 To lend context and perspective to the scale of these NFPC deficits, the federal government budget deficits for 2015 was RM37.2 billion. In 2016, it is estimated to hit RM38.7 billion while the government forecast RM40.3 billion for 2017.

In layman’s terms, the government has hidden the bulk of its excessive spending under the NFPCs to maintain a semblance of “moderate” budget deficit. However, so much spending has now been shifted to these NFPCs, that the NFPC deficit has grown by leaps and bounds to now become even bigger than the federal government deficit!

To make matters worse, the 29 GLCs accounted in the NFPC do not include debt-stricken 1Malaysia Development Bhd which is mired in more than RM20 billion of debt.

There is no question that the NFPC deficit is the biggest time bomb to the Malaysian public finances. We can already feel its ticking with the rapidly rising “debt service charges” which the government is forced to bear annually. This is caused, in no small part, by the government being obligated to pay for interest and loans that the NFPCs are unable to fulfil.

The federal government’s debt service charges have increased from RM20.3 billion in 2013 to a projected RM28.9 billion in 2017. The increase will only accelerate and snowball as NFPC financial obligations arising from the massive deficits are realised in the years to come.

By the time the time bomb explodes, the 2017 Budget which is already depressing, will feel like a Hawaiian vacation on hindsight.

Read more from this author :
Tony Pua
Read more like this :
#budget2017
View Comments
Most Read
Most Commented
Most Recent