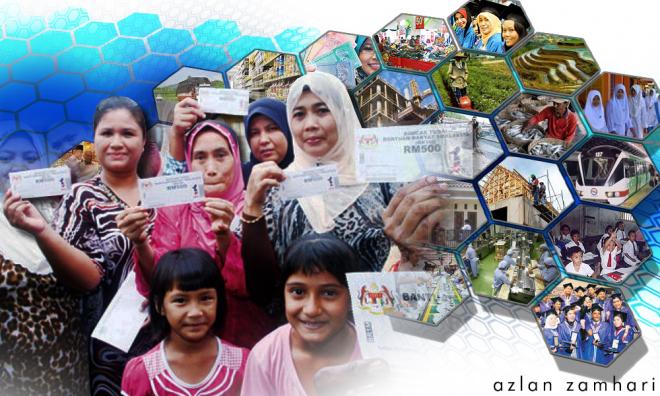 Is BR1M corruption or crass populism?

After the 2008 general election, the Penang state government prided itself on a plan to give cash handouts of RM100 annually to every senior citizen aged above 60. It also introduced a scheme to wipe out hard-core poverty by ensuring that every family receives at least RM500 a month.

Then in a move that I called ‘populism gone mad’, the Selangor state government decided to provide free water to consumers in the state. The current water crisis in Selangor is perhaps the instant karma that comes from such a poorly conceived populist project.

‘Free makan’ at whose expense?

Before he became menteri besar, Azmin had criticised the state government under Khalid Ibrahim for its spendthrift ways in splurging RM500,000 on a single official ceremony at a time when the state reserves had dipped below RM800 million. Has Azmin put a stop to such wasteful and populist ‘free makan’ splurges? Who pays for the free makan at open houses during each festival - the state government, Pakatan coalition or Selangor ratepayers?

There was even the time when the Pakatan Rakyat speaker told off state exco member Ronnie Liu for spending RM10, 000 on durian feasts for his constituents. Who knows what else goes on...

Is this corruption, or do free handouts count as corruption only when they are given out close to an election? Both coalitions are equally guilty of vote-buying through free handouts during the election campaign.

Mahathir gave only to favoured bumis

While Dr Mahathir’s term in office was not noted for free cash handouts to the lower income masses irrespective of ethnicity, he did grant contracts, licences, share options and other benefits specifically to ethnic Malay individuals and companies over and above other ethnic minority groups.

He created a class of newly-rich Malays with a vested interest in keeping their patrons in power. Many of these ‘favoured bumiputera capitalists’ only managed to survive the 1998 financial crisis through being bailed out indirectly by Malaysian taxpayers.

In fact, soon after the 2013 general election, Dr Mahathir accused Najib not so much for this alleged corrupt practice of free cash handouts but of pandering too much to the Chinese and of not giving enough attention to the Malays, who form the backbone of Umno’s support.

During Abdullah Ahmad Badawi’s administration in July 2007, ahead of the March 2008 general election, civil servants were awarded hefty pay increments of between 7.5 and 35 percent, while their cost-of-living allowances were doubled. Government pensioners, too, were awarded significant hikes in their monthly cheques.

For a sustainable economy and society, the lower income-earning Malaysians require an improved social and public welfare services and other reforms, not one-off cash handouts which are not sustainable and will worsen the budget deficit and national debt.

Secondly, we need to defend workers’ rights and interests by promoting workers’ right to unionise; legislating a progressive guaranteed minimum wage for all workers, including foreign workers; ensuring full employment, retrenchment and pension fund for all workers; abolishing the contractor system for employment of workers; allowing workers and their trade unions to be part of economic influence and decision-making of enterprises, especially control of their pension funds; promoting self-governing workers’ cooperatives to produce goods that are useful for society; according full rights as workers to all migrant workers irrespective of their immigration status.

Thirdly, we need an improved free public healthcare system for all Malaysians by allocating at least 10 percent of the gross domestic product (GDP) in the annual budget to healthcare; implementing better conditions for doctors, nurses and hospital workers in the public sector; freezing the expansion of private hospitals and preventing the leakages in the public sector to private contractors; providing homes and daycare centres for the elderly and disabled through benefits, support services, including access to mobile health care.

Fourthly, we need a people-centred and caring social policy by instituting a Housing Development Board, managed by elected local councils to implement an effective low-cost public housing programme for rental or ownership throughout the country for the poor and marginalised communities, with adequate space for community activities, recreation and green areas; respecting the rights of urban settlers in any development plan to upgrade their area or to re-house them; prioritising the public transport system in the country while regulating highway construction and car traffic in city and town centres; providing childcare and crèche facilities in all public and private sectors; providing rehabilitation facilities for those suffering from substance abuse.

Cash handouts do not empower the people

While some economists claim that these cash handouts will lead to higher domestic demand and consumption and stimulate the economy, others are concerned about rising fiscal deficits and inflationary pressures. They do not consider the most important factor in all this populism - the long-term dignity and empowerment of the people in the process of a sustainable national development.