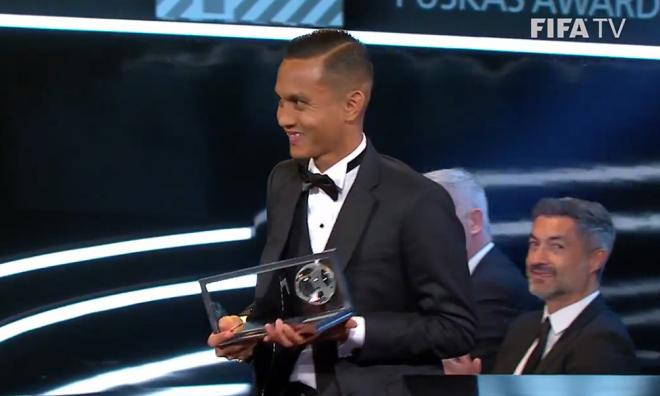 Faiz: I could not speak in Malay as no interpreter was provided

The man of the moment, Puskas Award winner Mohd Faiz Subri has explained why he did not simply choose to speak in Malay during his acceptance speech at the award ceremony early Tuesday morning.

Faiz had on Dec 5 last year, told Malay daily Utusan Malaysia that he wanted to speak in Malay if he wins the Puskas Award for the best goal of 2016 as well as to wear the traditional Baju Melayu.

But his intention to speak Malay could not be fulfilled as the International Federation of Football Associations (Fifa) only allowed the relevant football players to speak in English, Spanish or French.

This is because they were not able to provide interpreters for the award ceremony which was telecast live around the world.

Utusan Malaysia also reported that Faiz had to give up wearing the Baju Melayu because of the very low temperature in Zurich, Switzerland, which had reached as low as -3 degrees Celsius.

Despite all these, being at the Fifa Puskas Award and winning the award was an unforgettable moment for the Penang FA striker.

Faiz said he was quite nervous as he was about to give his speech that it took some time for him to look for the speech text in his mobile phone.

“I was only given 30 seconds to speak, so I was quite nervous. I was very nervous that I could not find the speech in my phone,” said Faiz.

However, among the praises heaped on Faiz’s victory, some netizens questioned why he did not speak in Malay while receiving the award.

Some, too, criticised his lack of preparation, as he had to search for the speech on his phone while some also took the opportunity to attack his less than stellar command of the English language.

Faiz is the first Asian to win the annual award since it was first handed out in 2009.

He was a virtual unknown before his long-range, swerving free kick wonder goal in early 2016 and he joins an elite club that includes Cristiano Ronaldo, Zlatan Ibrahimovic and Neymar.