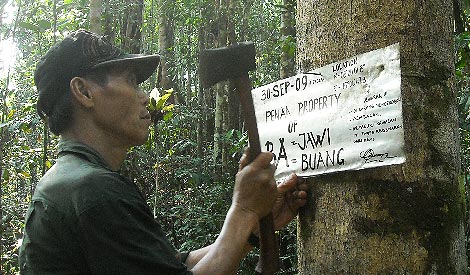 The politics of native titles in Sarawak

COMMENT On Jan 7, Dayak "intellectuals" gathered in Pending, on the outskirts of Kuching, the capital of Sarawak state in Malaysia, to discuss the issue of Native Customary Rights (NCR) land, more commonly called native titles.

The meeting was hastily organised because Malaysia’s Federal Court overturned a lower court’s decision and ruled that ‘pulau galau’ (communal forest reserve) and ‘pemakai menoa’ (territorial domain) do not have the force of law.

The ruling, in practice, meant most of the native title claims in Sarawak will not win their court challenge against the state for recognition of their NCR title.

What is NCR in Sarawak?

NCR, culturally, is widely understood in Sarawak as land belonging to the indigenous peoples of where there is no title issued. Under the Adat (customary law), NCR land has three components; ‘temuda’, ‘pulau galau’ (PG) and ‘pemakai menoa’ (PM). ‘Termuda’ refers to cultivated or farmed areas. PM and PG lie beyond the ‘Termuda’.

PG is usually understood to be a reserved area kept for communal use while PM is an area used for hunting and foraging by the Dayak community, and hence is usually much larger than the PG and Termuda.

The political issue and simple solution

NCR politics arises because of the way the Land Code (1958) was enacted. It only recognised NCR ‘as lands which were classified as Native Customary Land’ (NCL) prior to Jan 1 1958 and/or land gazetted as such by the minister concerned since 1958.

The only other authority who can issue NCL is the Superintendent of Lands and Surveys Department, who in the Sarawak set-up, will not issue NCL without the consent of the Lands Minister.

In other words, if the NCL was not created before 1958 and after that by the minister, NCR lands are under dispute.

The rule-of-thumb used by the state is that if the land is not NCR land, then the land belongs to the state, which can do whatever it wants to with it.

The issue would be less politically explosive if there was no pressure on the land. The reality is that there is tremendous pressure.

First, timber companies want to access the NCR-disputed land because it contains valuable timber, often worth millions of dollars.

Second, many oil palm plantations want access to NCR land. In almost all these cases, only politically-connected individuals and companies can get the state to issue them rights to these NCR-disputed land (in legal terms a ‘provisional lease’) that in turn allows them to harvest the timber or establish a plantation.

What makes the situation worse is that the NCR claimants are not informed about the lease and only find out when the lease holders show up with their machines.

The timber and plantation barons, often the same person, are quite happy to pay millions to get the timber extraction license and the lease.

In the process, a small number of elite Melanau-Malay politicians and Chinese timber barons have grown fabulously wealthy. The indigenous landowners get next to nothing.

In the past decade there have been hundreds of lawsuits filed by NCR claimants against the state for issuing these leases. All these cases have a very simple dimension; does the state recognise the native understanding of the term PM and PG?

In other words, does the modern Western-based legal system recognise that native people have rights and interests to their land that come from traditional laws and customs that existed prior to European colonialism?

The Mabo case in Australia ruled that the native land system is no less sophisticated than modern Western law relating to land, and explicitly recognised native title.

In Sarawak, the solution is simple and obvious. All the state has to do is to amend the Land Code (1958) to explicitly recognise the concept of PM and PG.

Yet for the past half-century, despite numerous lawsuits, the Sarawak Government has refused to do so.

This is surprising as the native groups in Sarawak are strong supporters of the ruling coalition, Sarawak Barisan Nasional (BN).

In fact, the Dayak indigenous population counts for about 40 percent of Sarawak’s population and are the majority in one-third of the seats in the State Assembly.

More than 80 percent of the Dayak-majority seats have gone to BN in every election since the 1980s.

Yet no attempts were made to amend the Land Code to resolve this issue.

Instead Dayak politicians, Dayak academics and Dayak “intellectuals” have held countless workshops, seminars and symposiums to pontificate about the various sub-sections of the Land Code, the meaning of PM and PG and the various legal ways via the court system to ‘fix’ the problem.

They are blind to the simple truth that a straightforward amendment to the Land Code will ‘solve’ the problem immediately.

If truth be told, after years of musing over the Land Code and various law suits, the same Dayak political leaders, Dayak academics and Dayak intellectuals are now more confused than ever.

Their endless discussions across the years over definitions and petty issues have baffled them, and they cannot see the forest for the trees.

This simple political remedy is now complicated by petty jealously and grandstanding by Dayak political leaders on both sides of the political divide.

Every Dayak political leader in Sarawak claims to be a champion on the NCR issue, including those holding senior positions in the Sarawak government.

Dayak political leaders in Sarawak know the simple legal solution but are politically incapable of getting the Sarawak government to amend the Land Code.

This is despite the fact that the BN coalition government has always secured the majority of Dayak electoral support and a Dayak has always held the number two position in the ruling Pesaka Bumiputera Party (PBB) party, leading to the holder becoming the deputy chief minister in the Sarawak government.

The only conclusions one can draw about the inability of the community to resolve the NCR issue are that they are held back by ‘divide and rule’ or self-serving Dayak political leaders.

Divide and rule sees Dayak politics manipulated by the top Melanau-Malay leadership with the support of the elite in the Chinese community.

Both these groups want the Dayaks to remain politically weak so that they are incapable of mounting a challenge to their existing power equation.

The power equation consists of Melanau-Malay leaders in PBB and Chinese timber/business tycoons who are mostly represented by Sarawak United Peoples’ Party.

Using a mixture of political coercion and money politics, they have ensured that the Dayak community is politically divided among all the four parties in the Sarawak BN.

The Dayak polity is not allowed to unite under a single political party.

Land issues lie at the heart of Dayak politics, as they are, like all indigenous groups elsewhere, the cultural soul of the community.

By making it hard for the Dayaks to get recognition of their NCR land, the state is directly telling the indigenous peoples of Sarawak that their culture and traditional customary laws are inferior to that of Malays and Muslims.

The best example to illustrate this is the 70 percent plus Iban constituency of Layar. For more than four decades, the constituency was represented by the same person who was also the deputy chief minister of Sarawak.

Yet, after four decades many parts of the constituency lack basic infrastructure such as clean water, electricity and proper roads.

What was even more incredible was when the deputy chief minister decided to retire in 2015, the seat was passed on to his son, who went on to win the seat without much difficulty.

Future with no titles in sight

The overall issue of native titles is, of course, nothing new. Many parts of the South Pacific suffer from this problem, often leading to tribal fights. Papua New Guinea and Solomon Islands are prime examples.

In PNG, the government does not even dare to map the entire country in detail as many groups enjoy exploiting ambiguous boundaries to protect their “land”. Even the use of GPS to precisely map the areas under dispute cannot be undertaken.

Like Sarawak, for political reasons the issue of native titles are purposely left legally ambiguous and no land titles can be issued.

The sad truth when it comes to native titles issue in Sarawak is that Dayak community has been completely led down the garden path by post-independent elected Dayak leaders.

Unless the Dayak community accepts this unpalatable truth, the NCR issue in Sarawak will remain ‘unresolved’ for the foreseeable future.

In the meantime, expect more forums, symposiums and seminars as the victims confuse themselves with the minute-details of the Land Code while completely missing the point that native titles are essentially a political issue in Sarawak.

The policy lesson from the Sarawak case is obvious - like most pressing issues affecting indigenous peoples in Asia, they are prone to political manipulation by the existing elite.

PROFESSOR JAMES CHIN is director of the Asia Institute of Tasmania, University of Tasmania. This article was first published by New Mandala.