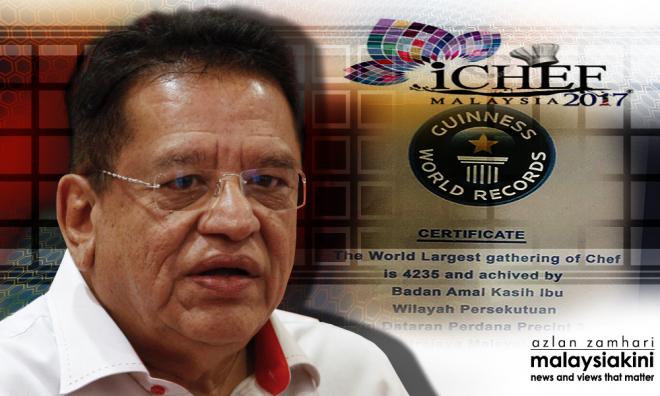 "Congratulations Malaysia, the record holder was Mexico, I salute all the Malaysian chefs and chefs all over the world who attended and competed," he tweeted over the weekend.

The Umno secretary-general also shared an image of the certificate of accomplishment, which bore the GWR logo, awarded to the iCHEF 2017 event.

"The world (sic) largest gathering of chefs is 4,235 and achived (sic) by Badan Amal Kasih Ibu Wilayah Persekutuan in Dataran Perdana Precint 3, Putrajaya Malaysia on March 25, 2017," according to the certificate uploaded on the minister's Twitter account.

However, netizens questioned the genuinity of the certificate and pointed to the grammatical errors as well.

This prompted one netizen to seek confirmation from GWR, and the latter replied: "Unfortunately that's not a genuine certificate issued by our records team."

Malaysiakini has attempted to get the minister to respond on the matter and still waiting for his comment.

Organiser: It was a gimmick

The New Straits Times quoted iCHEF 2017 organiser Finemen (M) Holdings Sdn Bhd as stating that the incident was the result of a misunderstanding during the announcement on the "Guinness World Record achievement" at the event.

The organiser clarified that the certificate was not from GWR, but used purely as a gimmick for the announcement.

Finemen Holdings managing director Hakim Omar said the misunderstanding occurred when the representative from GWR was unable to attend the event.

According to Hakim, MBOR had verified that the event was the largest of its kind, surpassing the previous record of 3,635 chefs event in Mexico on March 17, 2014.

"However, a technical error occurred when the organiser prepared a replica Guinness World Record certificate as an announcement gimmick, and not the actual certificate," he explained.

To remedy the error, he said, Finemen Holdings would liaise with GWR to obtain official confirmation and to get the actual certificate.