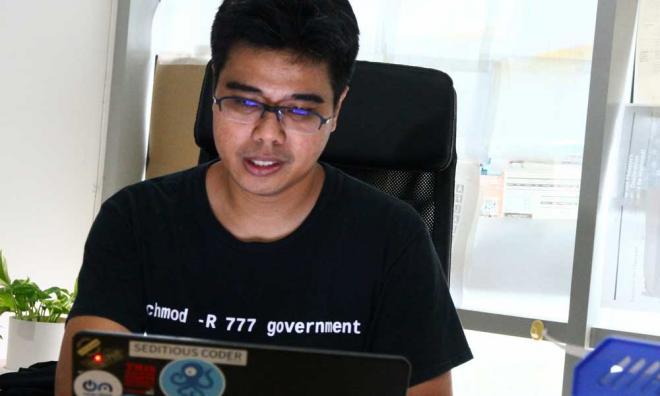 One computer prodigy’s path to activism

MALAYSIANS KINI | If one could judge a person by what he wears, few are more apt than the T-shirt that Sinar Project co-founder Khairil Yusof, 40, was wearing for his interview with Malaysiakini about a month ago.

It features one line of computer code. When translated into English, it roughly means: Give everyone the permission to read, write, and execute everything in the folder named ‘government’.

Despite how pervasive the Internet has become in our daily lives, Sinar Project is the only group working to promote civic technologies in Malaysia, and is also one of very few in Asia.

Despite its unique role, Sinar Project has run into funding issues that many other NGOs share, and Khairil is mulling to return to his former role as an IT consultant while keeping the project alive on a part-time basis.

Here, edited for concision and clarity, is Khairil’s story in his own words, as told from Sinar Project’s office in Subang.

MY FATHER WAS A DIPLOMAT, SO I GREW UP IN A WHOLE LOT OF DIFFERENT PLACES - India, Russia, and Australia. I was born in Johor, but when we were around in Malaysia, we were usually in Kuala Lumpur.

For example, I was only in a Malaysian primary school for Year Four, and then after Form One, I was in Australia already. I didn’t actually grow up in Malaysia. At least not for a long stretch.

Since I was a child, I didn’t feel that I was supposed to be constrained. Just enjoy any form of knowledge or interest, without being shoehorned into some specific area...