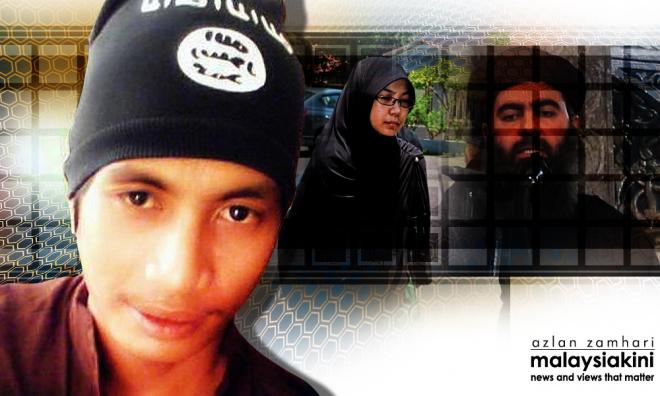 Report: Siti Aishah pledged allegiance to IS leader, planned to flee to Syria

The daily, quoting a source familiar with Malaysian IS supporters' operations, said the 29-year-old former Master's student had done so in a Telegram messaging app comprising members of a local IS cell.

According to the report, Malaysian IS militant group leader in Syria, Muhammad Wanndy Mohamed Jedi, was the witness to Aishah's swearing of allegiance on several occasions.

"Probes into her case strongly suggested that she had allegedly pledged allegiance to Abu Bakr al-Baghdadi several times via Telegram with Wanndy serving as her witness.

"Though many criticised her arrest, calling it an abuse of power and violation of human rights, intelligence gathered by the police, is, however, telling a different story," the source was quoted.

Aishah is currently being held at the Kajang prison under Sosma for possessing 12 books allegedly related to terrorism.

The report said Wanndy had also functioned as the middleman for the swearing-of-oath process, also known as Baiah, by Malaysians to Abu Bakr.

The process, which used to be carried out in the presence of the IS leader, is now just as "valid" when done via social media applications, added the report.

Apart from swearing allegiance to Abu Bakr, Aishah was also allegedly an active participant in the said Telegram group, and was planning to flee to Syria to fight alongside IS, claimed the source further.

"Her alleged plan was thwarted following her arrest, after her father, Atam Jusoh, lodged a report when he sniffed her out before she could join the group in Syria.

"This was why she had to be fitted with the electronic monitoring device...the Crime Prevention Board had agreed to this as there was a strong basis for it, especially after taking into consideration her father's report," said the source.

The source added that Aishah had also allegedly planned to obtain a fake identification card with the help of her former lecturer, Dr Mahmud Ahmad, who is now leading IS militants in the Southern Philippines, after he fled there.

According to the source, the books over which Aishah was detained for had nothing to do with her field of studies in Universiti Malaya, which was Usuluddin.

Instead, the books in her possession, which were passed on by Najib Hussein (Malaysian IS bomber who was killed by Filipino forces on Basilan Island), reportedly promoted the Salafi Jihadi ideology and contained elements that could incite violence.

Aishah was first arrested in March last year under Section 130JB of the Penal Code and Sosma for the possession of the books.

The following month, she claimed trial for the possession of the books at the Kuala Lumpur High Court and in September last year, she was acquitted of the charges, only to be rearrested on the same day, for 60 days under the Prevention of Crime Act (Poca).

Upon her release from Poca, she was fitted with an electronic monitoring device and put on house arrest.

She was dismissed by UM following her arrest in March last year.

On March 30, her father made a tearful plea for his daughter's release, claiming that her lecturer had instructed her to do research into the books, which led to her arrest.