ADUN SPEAKS | Just a week ago, Shabudin Yahaya of Umno, who is the Member of Parliament for Tasek Gelugor in Penang, caused outrage among right-minded Malaysians by saying that there is nothing wrong with rape victims marrying their rapists, as they would not have to face a “bleak future”.

Shabudin also said that girls as young as nine or 12 years, as long as they have reached puberty with bodies akin to 18-year-old girls, are ready to be married.

Deep down, at the core of Shabudin’s “marrying the rapist” and “nine-year-old can wed” notions, are not only his personal perversion but also the manifestation of the deep-rooted patriarchy in Malaysian society.

When rape takes place, we often hear questions like “What was she wearing?", “Where was she?”, “Did she go out late?”, “Was she drunk?" and “Did she say no?” - as if the female deserved to be raped if the answers to these questions fit the stereotypical conditions of “inviting rape”.

The toxic belief that victims are partly or fully responsible for their own violations continues to permeate in our society.

This patriarchal victim-blaming culture explains why very few victims have the courage to report to the authority, not to mention seeking rape survival support, because they are afraid of being blamed, looked-down upon and deserted.

Only two out of every 10 rape cases in Malaysia are reported. On average, there are about 3,000 reported rape cases every year, if we include the unreported cases, we’ll come out with an astonishing fact - one girl or woman is being raped somewhere in Malaysia every 35 minutes. Worse still, around two out of three rape victims are minors - girls below 16 years old!

According to a parliamentary reply from the Home Ministry, a total of 28,471 rape cases were reported from 2005 to July 2014, of which only 16 percent of them (4,514 cases) were taken to court, and only 2.7 percent of them (765 cases) were found guilty. What a saddeningly low rate of conviction!

There seems to be no justice for rape victims in Malaysia. They are questioned, doubted, looked down upon and even suggested that they marry the very persons that violated them! Even when they are brave enough to follow through the legal system, less than three out of 100 victims will see justice being served.

How the federal government and Umno have been trivialising Shabudin’s abhorrent remarks about rape for the past one week shows how little commitment they have to combat rape culture in Malaysia. 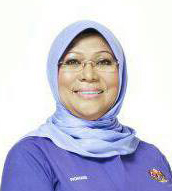 I am particularly disappointed with Women, Family and Community Development Minister Rohani Abdul Karim (photo), who is supposed to be the very person that leads the country to safeguard the interests of women and girls.

Rohani gave no words of rebuke or correction. She instead took a non-intervention approach and said it is up to Shabudin to decide to apologise or not for his statement on Parliament. All of these actions send wrong signals to the society that such patriarchal mindset is tolerable when it is not, for it will continue to fuel the rape culture in Malaysia.

Rohani should immediately right the wrong. Most importantly, the Women’s Ministry should look into ways to spread the correct information about rape. Without a mindset shift from this patriarchal culture that fuels the rape culture, the perpetuating rape problems in Malaysia will not be solved.

I take this opportunity to inform one and all that as part of our efforts to counter this victim-blaming culture and to raise awareness about rape, my office has sponsored an anti-rape video titled 'Rogol, Salah Siapa?'

We also built a website, at www.antirogol.com last year, that publishes important information to help rape victims and their families as well as activists. We hope all Malaysians can help to spread this information to their friends and families.

YEO BEE YIN is the state assemblyperson for Damansara Utama.