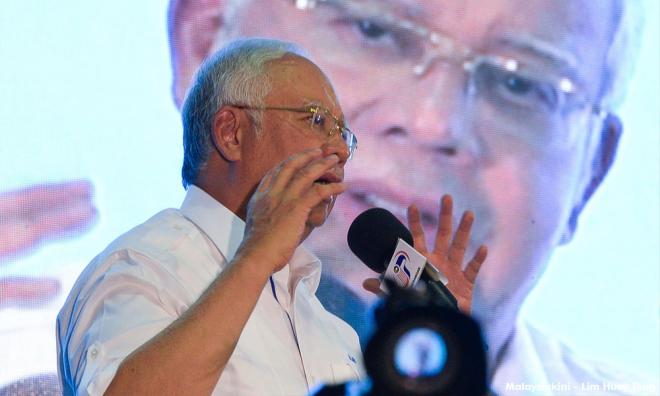 If Najib not a public officer, then what is he?

YOURSAY | ‘Poetic justice has been served again on Dr M for castrating the judiciary.’

Najib as PM is not a public officer, High Court rules

Odin Tajué: Here’s Corruption and Crime Commission of Western Australia's definition of 'public officer' - “The term public officer is defined in section 3 of the Corruption, Crime and Misconduct Act 2003 by reference to the definition in section 1 of The Criminal Code.

Is MO1 (Malaysian Official 1) not a member of parliament?

From the Legal Dictionary - “A public officer is ordinarily defined as an individual who has been elected or appointed to exercise the functions of an office for the benefit of the public. Public officers may be classified into different groups - executive, legislative, judicial, etc.

“Executive officers, such as the president (of the United States) or state governors, are public officers charged with the duty to ascertain that the law is enforced and obeyed. A legislative officer, such as a member of Congress, has the duty of making the laws.

“A public officer whose duties include administering justice, adjudicating controversies, and interpreting the laws is called a judicial officer. A de jure officer is one who is legally appointed and qualified to exercise the office.

“A de facto officer is an individual who appears to be legally qualified and appointed to an office but is not due to some legal technicality, such as failure to file a financial disclosure statement within the time prescribed by statute.”

Going by this definition, MO1 is also indeed a public officer/official.

Poetic justice has been served again on former PM Dr Mahathir Mohamad for his declawing and castrating of the judiciary - besides a few other malefactions of his.

Anyway, one has no choice but to wish he and his colleagues better luck with their appeal.

Vijay47: I am sure that somewhere within that maze called the law, there must be some gobbledygook that suggests that Malaysia's prime minister is not a public servant.

High Court justice Abu Bakar Jais is no doubt a direct descendant of Solomon as he had dispensed with such irritations as deciding on the merits of the application.

The good judge, however, has kindly revealed that Najib and his band are members of "an administration" though he refrained from informing us what nature of creature an administration is.

Thus, the people are caught in a Catch-22 chicken-and-egg situation - what avenue is open to the public when a leader, aided by a conniving Parliament and pliant regulators like the attorney-general (AG) and that inspector-general of police (IGP) Khalid Abu Bakar, allow him to continue unfettered by the demands of the law?

I hope, Abu Bakar, that unlike many judges of late, you were guided more by legality than the syariah.

Gerard Lourdesamy: The learned High Court judge has opted to give a very narrow and restrictive interpretation to the meaning of public office and public officer when in reality there is a huge difference between the two.

The PM as a member of the administration is a holder of a public office exercising executive functions and powers. But for the purposes of the constitution, the Government Proceedings Act 1956 and the Interpretation Acts 1948 and 1967, he is not a public officer or public servant.

The tort of misfeasance in public office applies to anybody or person exercising executive functions or powers. The cases from the UK, Canada, Australia, New Zealand and India have held as much. It is the nature of the exercise of power by the office that matters and not its nomenclature.

The Federal Court in PP vs Mohd Khir bin Toyo had correctly interpreted the meaning of public servant and public office after considering the constitution, various statutory provisions and the common law cases.

Anonymous 706151436780066: It's no small matter to trifle with a court decision, but this time the judge has clearly misdirected his mind.

The judge could not have missed that Najib has committed a wrong. He chose to find an escape route for Najib using some fictional legal reasoning but it defies common sense and violates the ordinary citizen's sense of justice. I hope the Court of Appeal will right his error.

Slumdog: This ruling says everything about the justice system in Malaysia. “The judge made the ruling in chambers and decided to strike out the suit without hearing the merits of the application.”

We have to marvel at the incompetence of this judge to make such a nonsensical decision without hearing the substance of the application, unless of course he is beholden to Najib.

The judge only needed to research the definition of public official in other democratic jurisdictions around the world to conclude that Najib is in fact a public official. But hey, this is Malaysia.

Moontime: If he is not a public officer, then how come he is performing all the duties as one? It just doesn't make sense. Then again, nothing seems to make sense here in Malaysia anymore as long as we still have a kleptocratic government in place.

Bluemountains: How can Najib not be a public officer when his salary comes from public funds? Further, if Najib is considered a member of an administration, does it mean that he is immune from prosecution despite having committed wrongdoings?

Former Selangor MB Mohamad Khir Toyo, who was a member of an administration, was prosecuted and sentenced to prison for having committed wrongdoings.

Gaji Buta: Anyway, how about the finance minister? Is this position also not a public officer? Maybe the 'misfeasance' was less as finance minister, so this could be the less preferred legal route.

Maybe the finance minister had committed the misfeasance, and turned to MO1 to assist him in covering it up?

Just so happens that both could be the same person? Can one person be tried separately as two different people or posts?

Godfearing: It's time for Dr M to taste his own medicine. It's time for him to revisit what he did to the judiciary when he was PM. You reap what you sow.

Ericlcc: Does it make any difference whether Najib is a member of administration or member of public service? They are to all intent one and the same.

Both derive their salaries from the same source. Both make decisions that impact on public affairs. The only difference maybe members of administration have higher status and prestige compared with members of public service.

P Dev Anand Pillai: Yes, a nonsensical decision, if they are capable of getting a pension from the consolidated fund and as a member of parliament of the constituencies that they represent, then what kind of special category do these people belong to that they cannot be sued?

He is public officer No1 as he is elected as an MP first and then becomes prime minister and derives his income from the public purse, which means the funds in the Treasury.

So, what kind of judgment is this?