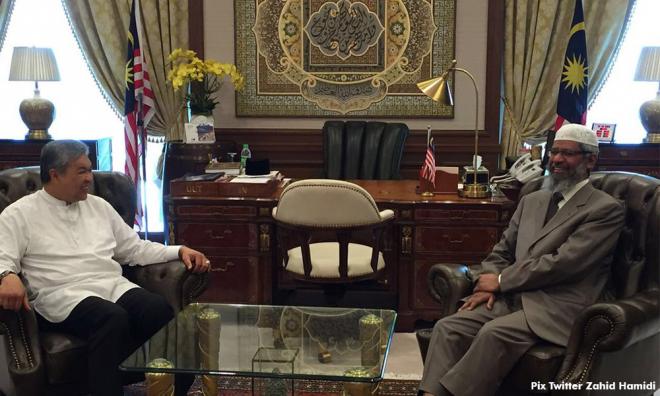 Malaysia distancing itself from Zakir Naik?

A few days ago, Deputy Prime Minister Ahmad Zahid Hamidi assured the Malaysian Associated Indian Chamber of Commerce and Industry (Maicci) that Malaysia would not give sanctuary to any fugitive, even if the fugitive happened to be Zakir Naik.

Zahid also informed the delegation that Zakir was not in the country and his exact whereabouts were not known. Zahid pretended that he was not in the know, but surely he was aware of the movements of Zakir.

Zakir Naik is not just an ordinary person, for he has become an infamous person in international circles. He is not just an occasional visitor to Malaysia, but a very very important person with the status of permanent resident.

But the relationship between the Malaysian authorities and Zakir Naik might not be the same anymore. There is a slow but sure attempt to distance themselves from the actions of Zakir.

In short, Zakir is no longer a ‘darling’ to the Muslim masses in Malaysia, or elsewhere.

Two warrants of arrest have been issued by the authorities in India for his arrest for alleged involvement in terrorist and money-laundering activities. The Indian authorities impressed upon a Mumbai court to issue the warrants, having provided the necessary evidence of the alleged nefarious activities of Zakir Naik.

Recently, it was only after India sought the red notice alert through the Interpol that Zakir Naik might have realised that India was serious about arresting him.

Malaysia has probably realised that Zakir’s presence in the country and his allegedly incendiary speeches might not be conducive to the long term interests of the country. Zakir single-handedly, through his speeches, caused apparently irrepairable damage to ethnic relations in the country...