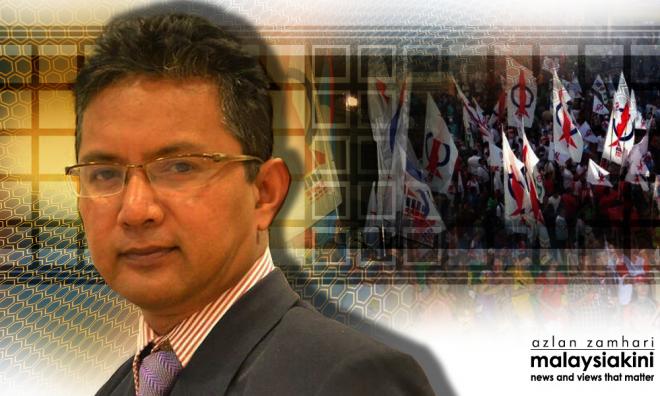 Kamarul Zaman, who lodged a report on May 17 against Yeoh for allegedly "proselytising" in her biography, now intends to urge the Registrar of Societies (ROS) to cancel DAP's registration as a political party.

"To all academicians working in local universities, it is my pleasure to inform you that I have started an initiative to prepare a memorandum to urge the ROS to send a show-cause letter to DAP (to explain) why their registration cannot be cancelled, and subsequently, to cancel DAP's registration if the party fails to provide a satisfactory representation," he said in a statement today.

He explained that the basis of his memorandum is that many of DAP's activities and affairs purportedly go against and does not take into consideration Islam's position as the official religion of the country, as well as the position of the Malays and the Orang Asli of Sabah and Sarawak.

This basis, Kamarul Zaman said, is in line with Section 2A(1) of the Societies Act, which states that it is the duty of all registered societies to carry out its activities and affairs in accordance with the federal and state constitutions.

The same provision also states that if any activities or affairs of the society violates or shows disregard for:

a) the system of democratic government;

b) the position of Islam in Malaysia;

c) the use of the national language for official purposes;

d) the position of the Malays and the natives of Sabah and Sarawak; and

e) the legitimate interests of other communities;

the ROS may cancel the registration of the society after an opportunity for representation is provided.

Thus far, more than 100 academicians from 21 local universities, including 18 professors and 24 associate professors, have agreed to be signatories to the memorandum in their personal capacity, Kamarul Zaman claimed.

He also called on academicians in local universities who are interested in signing the memorandum to contact him, with the condition that they have a PhD.

Kamarul Zaman yesterday continued his tirade against Yeoh, saying her biography 'Becoming Hannah: A Personal Journey' should only be sold at bookstores dealing with Christian religious materials.

“I have no problem with sales of religious materials, including the Holy Bible.

“What troubles me is the action to deceive book readers by saying it is her biography, when in reality it contains Christian teachings,” Free Malaysia Today reported him as saying.

Before that, Kamarul Zaman had lodged a police report against Yeoh for allegedly proselytising in her biography, claiming that the book contained "too many stories and quotations from the Bible" and might influence him and others on Christianity.

He said he would not comment further about this claim as it was up to the police to investigate the matter, based on his report.

In return, Yeoh lodged a police report against the UUM lecturer for allegedly defaming her in an article, titled 'Hannah Yeoh contoh hipokrasi terbesar DAP' (Hannah Yeoh is the biggest example of DAP hypocrisy).

Yeoh's biography is an account of her life after she rose to prominence following her win as the Subang Jaya assemblyperson in 2008.

She won her seat again in 2013 and became Malaysia's first female state assembly speaker and the youngest at 34, when she was appointed to the Selangor assembly.

The book has been sold without restrictions from authorities since its release in 2014.