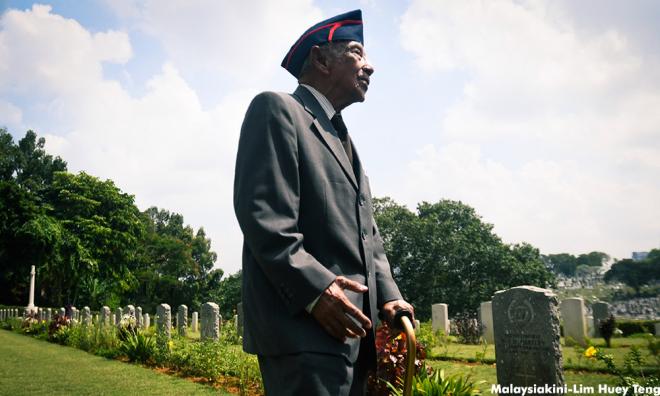 MALAYSIANS KINI | Seventy-five years have passed since James Jeremiah joined the Malayan Campaign, which was fought during the Second World War (WWII) from Dec 8, 1941 to January, 1942.

The son of a Frenchman, a railway manager in Indo-China, and Burmese woman, Jeremiah is the last surviving Commonwealth veteran who fought during the Japanese invasion of Malaya in WWII.

At 93, Jeremiah is a bundle of energy, a living heritage, a walking treasure trove of memories of a bygone era.

Vignettes of his life, love and the war remains vivid in his mind, as if history is being replayed over and over again, like a never ending movie.

We travelled back in time when he showed me his treasured collection of black and white photos, his well-read Bible, every page lined with colourful markers, and old but not forgotten love letters sent to him by his beloved wife, Hilda, who died in 2006.

His love for music was evident when he proudly showed me his 2,000 strong collection of vintage vinyl records, still neatly packed in their envelopes.

He opened a cabinet full of wine bottles, in all shapes, sizes and labels, but claims it was just a hobby as all his life, he never took a sip of the drink.

Jeremiah now lives with his eldest daughter Joyce, and his dog, Mario, and time seems to be in a marathon race but the painful memories of war has not faded.

After nearly three-quarters of a century, Jeremiah is still as bewildered as when he first decided to defend his country whenever he hears stories about wars.

“I cannot understand why people want war," he shakes his head, recalling the first Japanese bomb which fell around Penang Airport in Bayan Lepas where he was posted to after his training.

“Any country which fought the war remains the same. America is America, so is the United Kingdom, Germany, even Japan. So what are they fighting for?” he asked, when met at his home in Tanjong Bungah, Penang.

Jeremiah prays everyday that the human race will not see another war as life during those years was hard for everyone....