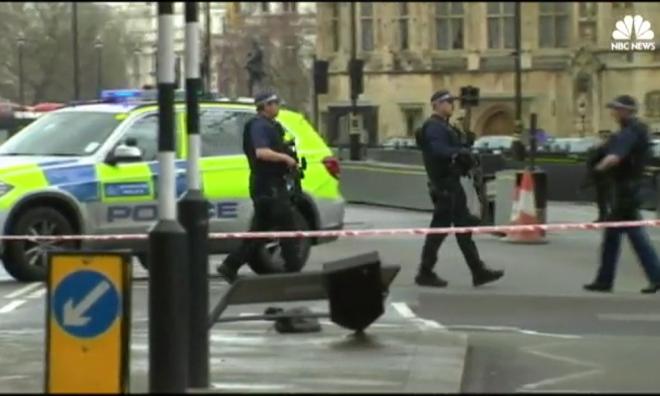 British armed police rushed to three incidents in central London on Saturday after a van ploughed into pedestrians on London Bridge and reports of multiple stabbings in the nearby Borough Market area.

Police sent out security advice to Londoners on Twitter saying "run, hide, tell" if they were caught in an attack. The BBC cited police as saying there had been more than one fatality.

London police believe six have died in addition to the three attackers, while London ambulance says more than 30 people have been taken to hospitals across the city.

The attacks come days ahead of a June 8 election and less than two weeks after a suicide bomber killed 22 people at a pop concert by US singer Ariana Grande in Manchester in northern England. There was no immediate claim of responsibility for the attacks.

"A van came from London Bridge itself, went between the traffic light system and rammed it towards the steps," a taxi driver told the BBC. "It knocked loads of people down.

"Then three men got out with long blades, 12 inches long and went randomly along Borough High Street stabbing people at random."

Prime Minister Theresa May had been informed and was being kept updated, her office said, while US President Donald Trump had also been briefed by his national security team, the White House said.

One woman told Reuters she saw what appeared to be three people with knife wounds and possibly their throats cut at London Bridge at the Thames river. Reuters was unable to immediately verify her account.

Stabbings on the street

Police said they fired shots after reports of stabbings in the nearby Borough Market area, and that they were also responding to an incident in the Vauxhall area further west, but gave no immediate details.

Streets in the area would have been busy with people on a Saturday night out. BBC showed dozens of people, evidently having been caught up in the attack, being escorted through a police cordon with their hands on their heads.

British Transport Police said casualties were reported after an incident that may have involved a van and a knife attack, while the London Ambulance Service said it was sending multiple resources to the incident near London Bridge.

One witness told the BBC she saw a speeding white van veering into pedestrians at London Bridge. That witness said the van hit five to six people. Reuters television pictures showed dozens of emergency vehicles in the area around London Bridge.

"We were in an Uber (taxi) going towards London Bridge and suddenly we saw people running. The Uber stopped, we asked people what was going on – people said there was shooting," said Yoann Belmere, 40, a French banker living in London.

"Now the area is completely closed with police cars going one way and ambulances going the other," he told Reuters.

The incident bore similarities to a March attack on Westminster Bridge, west of London Bridge, in which a man killed five people after driving into a crowd of pedestrians before stabbing a police officer in the grounds of parliament.

The Manchester bombing on May 22 was the deadliest attack in Britain since July 2005, when four British Muslim suicide bombers killed 52 people in coordinated attacks on London's transport network.